In stark contrast to their northern tour malaise, the All Blacks savoured their sold out Eden Park homecoming to launch this season in style.

Casting aside near constant Covid complications that robbed them of three players and four coaches this week, the All Blacks delivered the demanded response to quell mounting fears after successive defeats to Ireland and France to end last year.

Their 28-year Eden Park record preserved thanks to a desperate defensive display as much as the sparkling attacking moments, the All Blacks took an immediate stranglehold on this highly-anticipated three-test series against Ireland.
Scoring six tries against the best defensive team from the Six Nations is no easy feat.

Often the All Blacks' nemesis in recent years, having won three of their previous five tests, Ireland gradually disintegrated in front of a 48,195-strong crowd. As the match wore, and the All Blacks' dominance grew, Ireland's frustration became clear.

By the finish, the notion that Ireland are a different beast at home rung true. 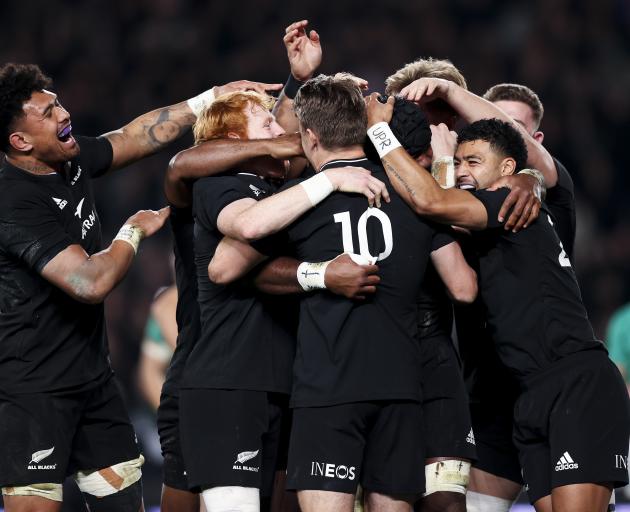 The All Blacks celebrate Pita Gus Sowakula's second half try during an impressive win over Ireland at Eden Park. Photo: Getty Images

It's impossible, though, to understate the importance of this victory for the All Blacks. Losing at home for the first time against Ireland was not an option. In that dreaded scenario, the walls would have caved in.

Victory, while not perfect, will relieve the pressure valve on All Blacks head coach Ian Foster, who emerged from Covid isolation on the day of the test, and his management team.

First tests of the year are traditionally rusty for the All Blacks. Covid-enforced changes and disruptions could have been unsettling but the All Blacks instead pulled together with senior players leading the way to brush concerns aside and blood two rookies, Leicester Fainga'anuku and Pita Gus Sowakula. Both seized their chances, the latter claiming a try on debut.

While elements of their game require refinement, the All Blacks clearly have more to come which will please Foster. Their largely dominant scrum was a big tick. So, too, the defence that denied Ireland several tries. The menace in the tackles from the All Blacks are sure to leave their mark. 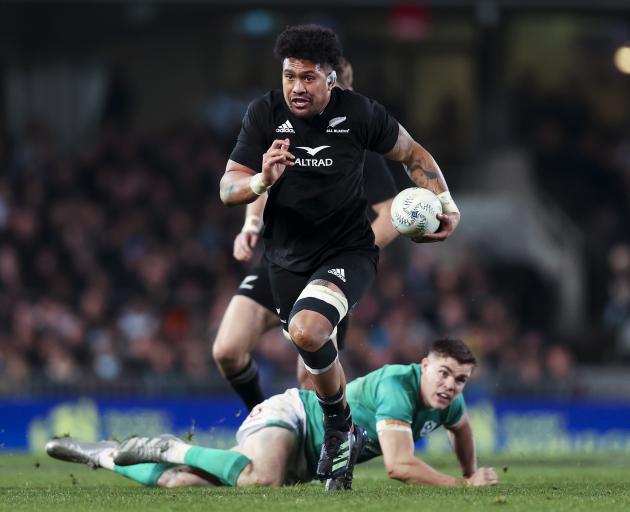 Ardie Savea puts his foot down on his way to the try line. Photo: Getty Images
A 93 per cent tackle rate (191/206) tells you everything about their defensive excellence. Replacement Irish first five-eighth Joey Carbery was unlucky to have his try ruled out for a knock on but the ball being knocked from Josh van der Flier's grasp over the line typified the All Blacks defensive efforts.

A change in attacking tactics proved telling from the All Blacks. On the back of an improved platform, Aaron Smith consistently pushed the point of attack to pick out his forward runners stationed two or three wide of the ruck. This stretched Ireland well beyond their organised ruck defenders to allow the All Blacks more breathing room to strike. Sam Whitelock's midfield backdoor wrap with Rieko Ioane that set Leicester Fainga'anuku away in the build up to Jordie Barrett's first half try was case in point.

Firmly in control, leading 28-5 following five first half tries, the All Blacks put the foot on the throat in the second half. Ardie Savea's second try in which he ghosted into the line to beat three defenders on the way to the line was a thing of beauty. As was Beauden Barrett's first half grubber in behind the defensive line for Quinn Tupaea to score.

Early nerves were evident as Ireland peppered the short side and found success through their short kicking game to lay a platform for Keith Earls to claim the opening try.

From there, though, the All Blacks got their game going through defensive resilience. Barrett nabbed a crucial intercept to save a try; Sevu Reece made notable stops on his wing and Ofa Tuungafasi forced an error with a huge hit on opposite Tadhg Furlong.

Ireland had ample possession to stay in touch and looked good at times when they shifted the ball between backs and forwards but they struggled to break the All Blacks line – perhaps a nod to Joe Schmidt chipping in on the defensive structures this week.

Defensively the All Blacks not only held firm but rattled Ireland to force regular errors that they then feasted on through deadly counter attack.

First Reece ran 80 metres after a Barrett hit. Smith then pounced with a break up the middle followed by a chip and chase for Savea's first try after the All Blacks counter ruck gained a turnover.

Ireland weren't happy with referee Karl Dickson's interpretation of advantage in the lead up to Reece's try or the ruling of Smith's knock back for Savea's strike.

The visitors also weren't helped by losing Jonathan Sexton to a head knock in the 31st minute. In a significant blow, after failing his HIA Sexton will now be ruled out for the remainder of the tour under World Rugby's new 12-day standdown protocols.

Yet as the losses mount – this defeat coming after the midweek humbling by New Zealand Māori in Hamilton – and troops continue to drop, Ireland's tour is fast descending into treacherous territory.