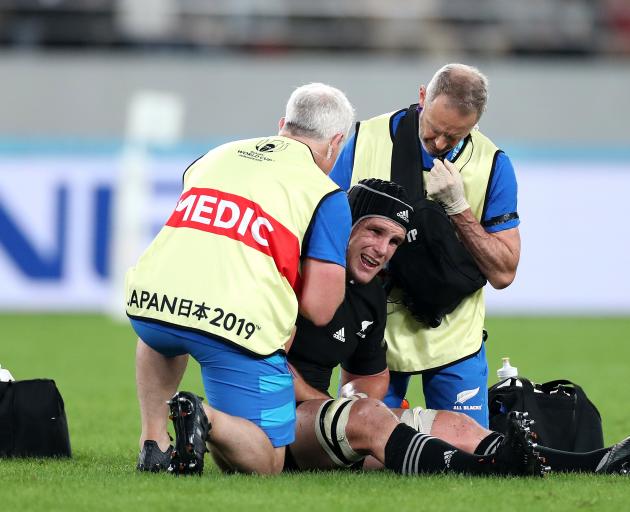 Matt Todd will miss the World Cup semifinal after injuring his shoulder against Ireland. Photo: Getty Images
All Blacks coach Steve Hansen, still enjoying a special performance from his team and also one of his horses yesterday, has revealed that Matt Todd dislocated his shoulder before the World Cup and that after receiving a knock on the same joint during his team's big quarter-final victory over Ireland the flanker is set to miss the semifinal against England.

Todd was absent from the All Blacks' first pool game against the Springboks a month ago due to a sore shoulder but the full extent of his injury hasn't been revealed until now.

Assuming the Crusaders player, who scored a try in the second half of the 46-14 win at Tokyo Stadium after replacing Brodie Retallick, is not available, the door will be open for Shannon Frizell to be the loose forward cover for Saturday's sudden-death match at Yokohama Stadium.

"He's hurt that shoulder again," said Hansen, who confirmed that Sam Cane's withdrawal for Scott Barrett at halftime was a tactical, rather than injury-related, decision. "We'll have to see how he goes but it's probably unlikely that he'll be available. Everyone else is 100 per cent.

"He dislocated it a wee while ago and got a bang on it again yesterday."

The clean bill of health for the rest of the squad, including first-five Richie Mo'unga who received attention late in the second half, bodes well for the All Blacks as they seek to find a similar level of performance against the English who demolished Australia 41-16 in their quarter-final in Oita. 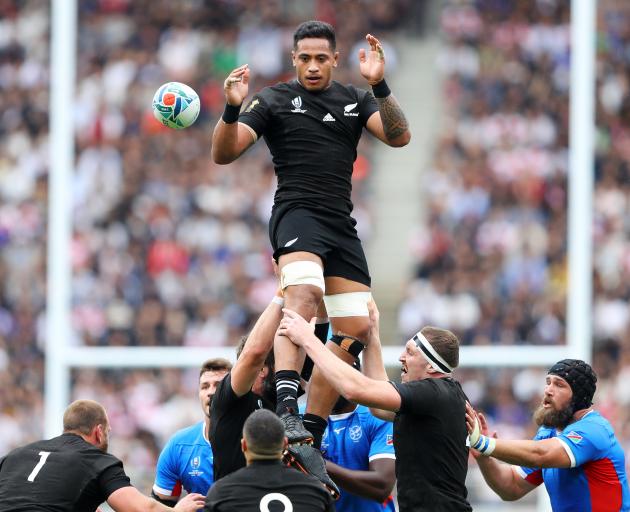 Shannon Frizell is likely to take Todd's place in the squad for the semifinal. Photo: Getty Images
The All Blacks are fully aware they need to maintain or better the level they got to against the Irish – which was spectacular at times as they ran in seven tries.

"We know that if we aren't better we aren't going to get what we want so it's pretty simple.

"They're playing good footy so they'll be confident, as we will be. We're playing well ourselves and we just have to make sure as a coaching group and management group where the players can express themselves on Saturday. That's the task."

Hansen said he felt England's first-half defensive effort served to demoralise the Wallabies, who had to chase the game and became increasingly reckless as a result.

"I watched the first half of it and Australia hammered and hammered and got no success. When you get no success you get frustrated. Obviously we can't afford to get frustrated against them. If we're not having success we've just got to keep building the momentum and pressure until we do. Both sides are defending really well. It is going to be a big clash."

At the end of a big weekend for him and his team as they chase their third consecutive World Cup victory, the All Blacks head coach was happy to reflect on the run by his horse Nature Strip, who ran fourth in the Everest at Royal Randwick in Sydney, five hours before kick-off in Tokyo.

Hansen part-owns the five-year-old gelding, who was a joint outsider in the $15.2million race, and very much in the running on the final bend.

He revealed he borrowed assistant Ian Foster's headphones and watched the race on a very quiet team bus. Maintaining a calm facade was not easy.

"I'm watching on the Sky Go and got a little bit excited there," Hansen said. "He kicked actually and I thought 'ooh, we've got a show here' and with 200 to go I thought, 'we've still got a show'. With 100 to go I thought 'hang on boy, hang on' but they all came at him. I'm really proud of him, they broke the track record, all four horses… he actually started from barrier 12 so had to do a bit more work than some of the others. Then I had a look at how much I got paid for running fourth and I was reasonably happy about that, so…"