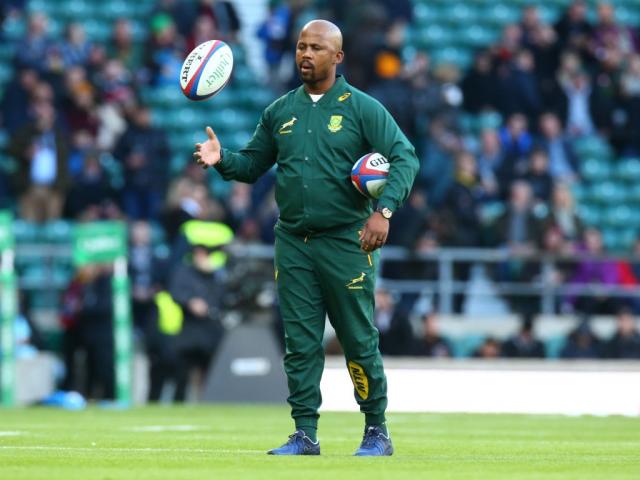 Mzwandile Stick. Photo: Getty Images
Springboks assistant coach Mzwandile Stick has begun the mind games ahead of their much-anticipated Rugby World Cup opener with the All Blacks on Saturday night.

It's not the All Blacks he's targeting though, but the referees, with Stick seemingly suggesting a pro-All Blacks bias in a bizarre unprompted comment during a press conference.

"Hopefully the match officials will respect the game because if you look at the way things are between us and New Zealand, I think we're more balanced now," Stick said, in a wide-ranging response to a question about his players being excited to play at the Cup.

"We are at an equal level at the moment. Hopefully, the officials will treat every team equally."

Stick's comments seemed to imply that the All Blacks sometimes get favourable calls from the referees at the World Cup — a mere four days out from the big opener.

As it happens, Stick's aside was the only barb of the 17-minute press conference, with the All Blacks expectedly getting plenty of respect from their counterparts.

Loose forward Pieter Steph du Toit genuflected the most, saying it was a massive honour to take on New Zealand, and listing plenty of areas where his side will need to be atop their game.

"We know what we have to do, we've done some good research as well on where we can try and exploit their weaknesses. Our scrums, our lineouts, our set piece has to be working because they're a team that targets your set piece."

Experienced prop Steven Kitshoff will be a key member of the set piece battle, and while he's expecting a difficult challenge, the All Blacks' increased focus on mobility and ball skills is not something he's overly concerned about.

"Even though we've got big forwards, they're still able to play for 60-80 minutes if required. I think the fact they're maybe a bit smaller or more mobile won't have such a big impact, especially in weather like Japan where the ball is slippery and you can't really run that much with ball in hand, it comes down to more of a set piece battle and I think that's where it's going to be interesting.

"New Zealand have good systems at the set piece. They can be quite dominant when it comes to scrums and can force penalties when they need to. That's just another battle we need to face and do our homework on and be as prepared as possible."

Aside from scrums, lineouts and set pieces, du Toit also added the breakdown to the Springboks checklist of All Blacks strengths, noting the challenges his unit will face when going up against Ardie Savea in particular.

"It's going to be interesting to see what new plans they come up with and hopefully we've got some good plans as well."