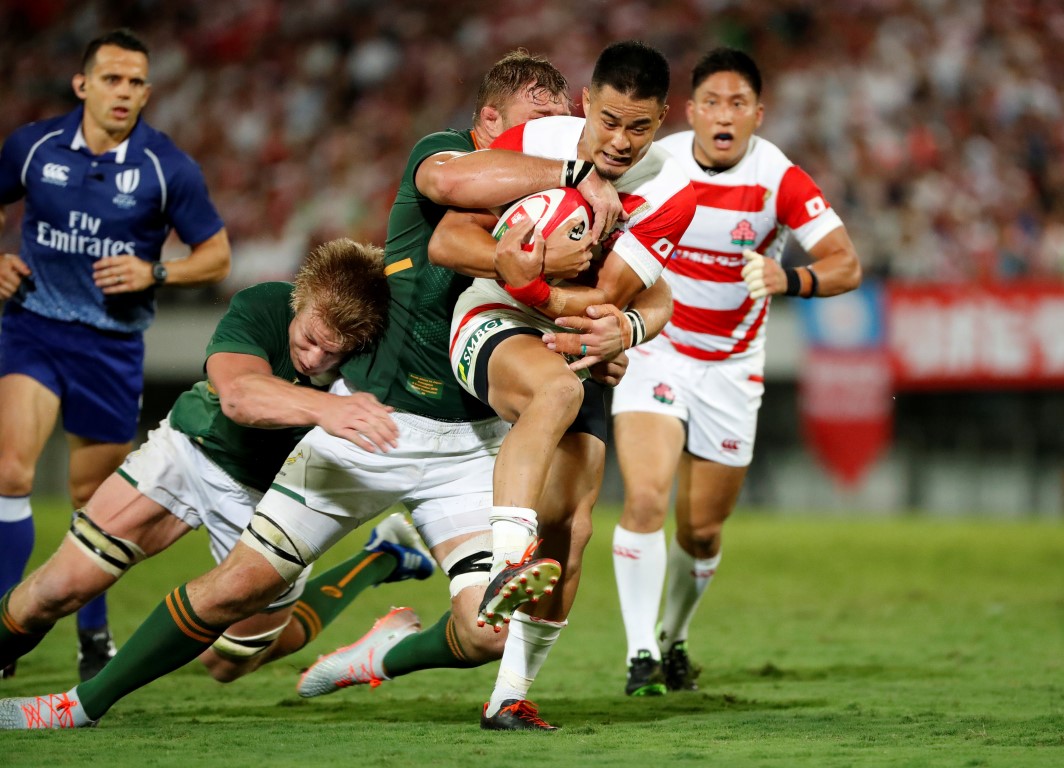 The Springboks were happy to make plenty of tackles against Japan. Photo: Reuters
The All Blacks' decision to finish their 92-7 win over Tonga with just 14 men created plenty of interest, but the Springboks were also trialling some tricky tactics in order to prepare for the Rugby World Cup.

Specifically, the South African side had their opening match against the All Blacks in mind, during their 41-7 victory over Japan.

Springboks coach Rassie Erasmus revealed post-game that his side purposefully went significant stretches without possession of the ball, to prepare themselves for a clash against the All Blacks in which they expect dominating possession to be difficult.

Coupled with that tactic was an attempt to prepare for potential slippery conditions - either simply from rain, or the heat and humidity, which can cause similar issues when trying to play a possession-first style of rugby.

"Playing without the ball was intentional. Just for this first game to see how it goes. Because we never know what it [the weather conditions] will be like against New Zealand," said Erasmus.

"One of our first priorities was to adapt to the weather circumstances. The humidity meant the ball was wet, after 25 minutes all the jerseys were wet and the arms were wet. We are used to this sort of thing from games in Durban in February so we treated it like it was a wet weather game," he expanded.

"It paid off a bit but there were times when Japan almost got away and scored tries. So I would say that there were stages we were really effective in doing it but also Japan could have capitalised on opportunities at other stages and then it could have been a different game.

The Springboks remarkably only had 36 percent possession, and made 164 tackles to Japan's 69 as they attempted to absorb pressure and then attack on the counter - managing to score six tries with that tactic.

"It was a dominant defensive performance that eventually led to us scoring tries from turnovers which I think were 80 percent successful," said Erasmus.

"It was exactly what we expected. The scoreboard wasn't a reflection of the game, there are a lot of tired bodies in our changing room but luckily no injuries. Japan pushed us and the game showed us we are on the right track for the All Blacks in two weeks time."

However, Erasmus knows that one trick that worked superbly against Japan won't be nearly as successful against the All Blacks next Saturday.

"Of our six tries, four came from contestable kicks. So it was a source of possession for us. It won't be as big a source of possession against New Zealand, we know that, but this Japan game was one we had to win as they went into the game with a 100 percent record against us. We thought we'd take them out of their comfort zone.

"Luckily for us, the plan worked."