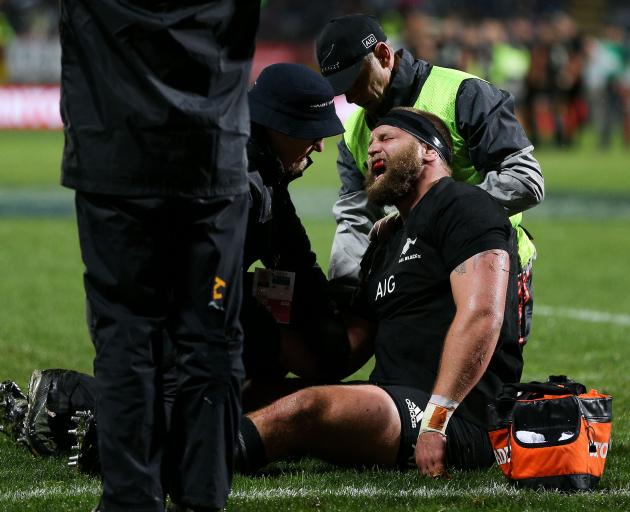 Medics work on Joe Moody's dislocated shoulder during the match. Photo: Getty Images
All Black boss Steve Hansen has lamented the loss of Joe Moody for the remainder of the test season with a shoulder injury, claiming the loosehead prop had been the best in the world in his position this year.

The 31-test Moody dislocated his shoulder in Saturday night's 39-22 victory over Argentina in New Plymouth, with post-game tests confirming the worst.

He will require shoulder surgery in the coming days and will be sidelined for six months, ruling him out of the Rugby Championship run-in and northern tour.

With veteran tighthead Owen Franks out for the season with an Achilles tendon issue and Charlie Faumuina France-bound, Moody's injury is a real headache.

Of Hansen's remaining props, only back-up loosehead Wyatt Crockett - with 64 tests to his name - has played for the All Blacks more than 10 times.

"We've lost Moody who's probably the No 1 loosehead in the world at the moment, I think, and then you lose Owen and Charlie on top,'' Hansen said.

Hansen said the All Blacks would look to bring in another prop for the side's Rugby Championship trips to Buenos Aires and Cape Town.

Tim Perry, Mitch Graham and Pauliasi Manu were named as potential candidates for the role, with Crockett and Hames to lead the loosehead charge.

Regardless, it was an opportunity to blood new talent in the No1 jumper after the continuity on both sides of the scrum in 2015 and 2016.

Following the losses of tightheads Franks and Faumuina, Nepo Laulala and Ofa Tu'ungafasi had performed admirably as a one-two punch.

Hansen felt the pair had done well to bully the Pumas' scrum.

"We can either sit here and sulk about that or we can say `right, here's an opportunity for us to have to grow some talent, give people opportunities'. In the past people have stood up, and we're going to need that,'' Hansen said.

"There's not a lot of well-known names but that's usually the case when you've had consistency - other guys don't build their case until they get an opportunity.

"We're pretty fortunate with what's coming through in the tightheads and, I think within six months we'll probably be saying the same about the looseheads.''

Meanwhile, the All Blacks have categorically ruled out shuffling their decks to include metronomic goal-kicker Lima Sopoaga in the starting XV for next weekend's Rugby Championship showdown against South Africa.

Star No 10 Beauden Barrett had a tough night at the office on Saturday, missing three sideline conversions from three.

Sopoaga later emerged from the bench to nail three conversions, as well as a penalty goal, to put the New Plymouth test to bed.

Nevertheless, Hansen said he would not move the versatile Barrett to fullback to accommodate Sopoaga at first five-eighth.

Barrett would start at No 10 against the Springboks, with his world-class running game and ability to score from anywhere a point of difference.

He would eventually master the art of consistent goal-kicking, having previously produced the goods in both of the side's Bledisloe Cup wins over Australia.

"We won a test match in Dunedin on goal-kicking. Do we want to put both of them in at the same time? Not to start, we won't, no. But having them both on the field at the end of the game is a possibility,'' Hansen said.

"Look, when Barrett kicks well, he kicks everything. When he doesn't, he misses two or three, and that's the process.''

Assistant coach Ian Foster, who works with Barrett on his goal-kicking, said the Hurricanes-based playmaker needed more time in the saddle.

He insisted that Barrett was slowly improving.

Not great losing Moody with the Boks coming up. Still a good chance to blood some fresh talent.