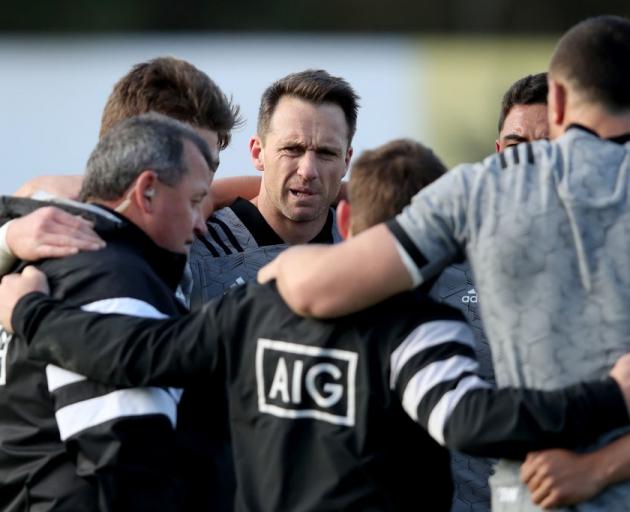 And yes, they have been dropped. Hansen was happy to confirm that in front of a packed press conference at the All Blacks' hotel today, perhaps to reinforce a message to all of his players that no one is safe only five weeks from the start of the World Cup.

The performances of tighthead prop Franks and outside backs Smith and Ioane have not been of an acceptable standard, and Hansen and his fellow selectors couldn't keep rewarding mediocrity.

And yet, for all the "panic" headlines dreamed up by media outlets across the ditch reveling in the All Blacks feeling a little discomfort for a change, there is every chance the experienced trio would have sat out this test at Eden Park on Saturday even had Hansen's men won at Perth last weekend rather than slipping to a 47-26 defeat.

Hansen wants to expose Nepo Laulala and inexperienced Crusaders pair George Bridge and Sevu Reece to something approaching the white-hot atmosphere of a World Cup knockout match. A positive side effect is that every one of his players – especially those within his pack – is on notice a week after they were too easily pushed around at Optus Stadium.

"Obviously we'd like Ben, Owen and Rieko playing better, but we've made decisions because we've got to find out more about these other people in big pressure-cooker situations and you don't get much bigger than this one – it's why we've got so many people here this week," Hansen said, regarding a big media turnout.

"Everyone's excited about it and it's a challenge we have to face up to."

Asked whether the trio had been dropped, Hansen replied: "Well, they're not playing, so you can say they've been dropped."

Big call? "It's not that big a call because as I've just said to you, we've got to find out more about these other people. To win a World Cup we've had to roll the dice a bit. That's the No 1 priority, but we wouldn't be doing it if we didn't think the other guys weren't good enough to do the job on Saturday if we play well.

"What happens if we get to the World Cup and Ben Smith blows a tyre, or Rieko blows a hamstring, and we've got to put a young guy in there who has never faced pressure like this before? It's ideal."

Bridge has played three tests, all as a substitute. Reece, a revelation for the Crusaders this year, has played one – a start against the Pumas in Buenos Aires.

Both have big workrates, are used to playing with No 10 Richie Mo'unga, and will look to provide a spark with their pace and ambition that has been sadly lacking for the All Blacks this year. The only question will be how they react to a high-ball bombardment; Bridge is very good in this area but the much shorter Reece may be a target for the Wallabies.

"We've seen [from them] probably more than we saw from Rieko when we put him in against the Lions [in 2017]. And everyone said 'you can't do that', but how did that go?"

Hansen, about to take charge of the All Blacks in his 100th test, was business-like today but was brooking no nonsense. He provided a template for how the All Blacks must react to the hole they've found themselves in because a first Wallabies win against New Zealand at Eden Park since 1986 will allow them to reclaim the Bledisloe Cup for the first time since 2003.

The "neck roll" question was raised – last week the Wallabies were guilty of using the illegal tactic of twisting an opponent's neck to clear him from a breakdown at least 14 times – by an Australian reporter, who asked, "Have you told the boys to cut out the neck rolls?"

Quick as a flash, Hansen replied: "Well, I haven't spoken to Australia."

He added: "We didn't do any … we may have done one. All you want from the ref is consistency and if there's foul play that he'll deal with it. Are neck rolls foul play? I suppose they are, yes."

Hansen finished with a reminder the All Blacks had been "punched on the nose" by Australia last weekend, and that "they've got one hand on the cup and we've got to take it off them".

Will the Wallabies enter Eden Park with some trepidation given their poor recent record there?