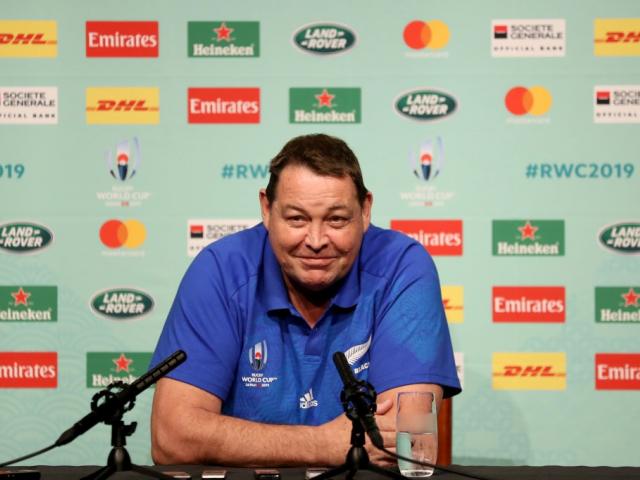 Steve Hansen. Photo: Getty Images
All Blacks coach Steve Hansen has quickly hit back at claims from Springboks opposite Rassie Erasmus that the All Blacks have traditionally received favourable decisions from referees because of their previous status as the No 1-ranked team in the world.

Erasmus yesterday doubled down on assertions from an assistant coach that referees have respected the All Blacks a little too much over their 10-year reign as top dogs – as far as the World Rugby rankings are concerned – and now that the landscape is more even, with Ireland ranked above them, so the officials should, in theory, be less partial.

The two nations play each other in a highly-anticipated first World Cup pool match at Yokohama on Saturday.

Not surprisingly, Erasmus' opinions got short shrift from Hansen in Tokyo today. In fact, his disappointment at Erasmus, a respected rival in charge of a team who have traditionally got on well with the All Blacks, was clearly evident.

Frenchman Jerome Garces, who sent off lock Scott Barrett in Perth the last time he officiated an All Black, test, will be in charge on Saturday.

"It's pretty obvious what they're trying to do and whilst I've got a lot of respect for South Africa and particularly Rassie, I think he's a great coach, I don't agree with what he's doing," Hansen said.

"He's trying to put pressure on referees externally and they're under enough pressure already. They don't need us coaches doing what he's doing.

"It doesn't matter who your ref is. As a coach or a team, you can always find things after the game that they didn't do and you can get emotional about that and think that they're picking on you and not on the opposition. We've done it ourselves.

"At the end of the day, they try to do the best they can do. Yes, they don't always get it right all the time and we've suffered from that just like other teams have. It's a big game, we just need to let the ref get on with it and prepare for it himself."

Asked whether the enormity of this match was manifesting itself in Erasmus' comments, Hansen said: "I don't know, that's probably something you'd have to ask him."

"All I can say is I'd hope so, yeah," Hansen replied when asked whether he thought the referees were strong enough to block out that external pressure. "They're not stupid people."

The Boks also mischievously floated the idea that injured lock Brodie Retallick may have been available for the test despite his continued recovery from a dislocated shoulder suffered the last time the two teams met.

He is likely to be involved in the All Blacks final pool game against Italy. Hansen said: "You'll have to wait and see but he's going pretty well at the moment. He's training well."

While the Boks have named a settled team with the addition of skipper Siya Kolisi the only change to their line-up from that test in Wellington in July, whereas Hansen has rolled the dice a little more; particularly with the selection of the inexperienced George Bridge and Sevu Reece on the wings. Ben Smith is on the reserves bench.

Hansen revealed Matt Todd wasn't included on the bench due to a sore shoulder, which isn't serious.

All Blacks team to face the Springboks: