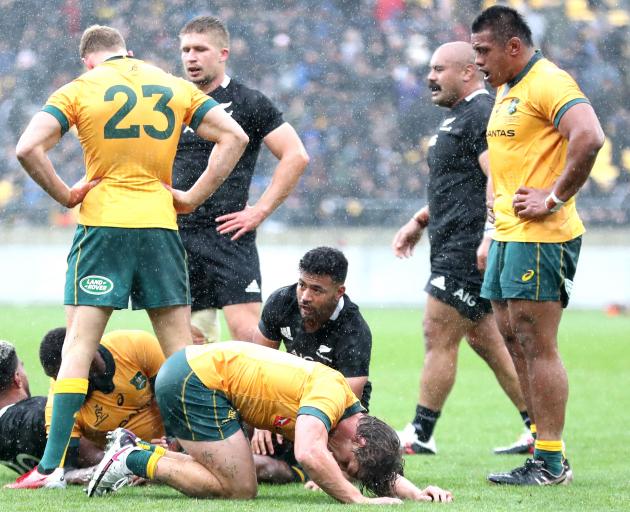 Michael Hooper of the Wallabies reacts after the final whistle in a dramatic Bledisloe Cup opener in Wellington. Photo:Getty Images
The Ian Foster-Sam Cane All Blacks era started on a nervous note with a dramatic draw that stretched nine minutes into added time and could easily have gone either way.

Test rugby's return was supposed to be a celebration. Instead on a wet and blustery Wellington day, in-front of 31,020 and many empty yellow seats, the All Blacks escaped with a draw after Jordie Barrett nailed a 79th minute penalty to earn a face-saving stalemate.

When wing Filipo Daugunu crossed on debut for the visitor's second try, to draw level at 13-13 after 63 minutes, the Wallabies dared to dream of their first win over the All Blacks in New Zealand since 2001.

They had their chances to seal that result, too, after Rieko Ioane dropped the ball over the line just before half time.

James O'Connor slotted a 73rd minute penalty to give the Wallabies the lead, and it seemed they may hold on from there, but much more drama was yet to unfold.

Barrett, after missing a penalty from 40 metres out moments early, made no mistake with the attempt to level the scores.

Reece Hodge had one final long range crack from 53 metres out to steal victory but he hit the posts. Caleb Clarke, who made a big impact off the bench, bobbled the rebound and the Wallabies launched a late assault on the All Blacks line.

The All Blacks held firm, managing to snaffle a turnover and earn a penalty. They kicked down field, lost the lineout, got the ball back and probably should have scored the match-winner while hammering away at the Wallabies line. 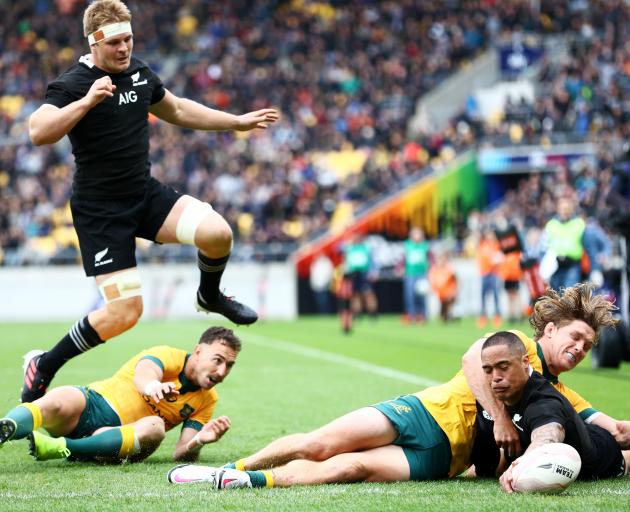 Aaron Smith crosses the line for the All Blacks. Photo: Getty Images
Rather than remain composed and pick and go a few more times the All Blacks flung the ball out to Barrett, who had to dive to catch the wayward pass. The ball was turned over from the resulting ruck, and O'Connor kicked it into touch to end a frantic finish.

Starting their own new era under Dave Rennie, the former successful New Zealand under-20s, Wellington and Chiefs mentor, the Wallabies will take great heart from a performance in which they went toe-to-toe with the All Blacks throughout.

Rennie's influence was evident in the work-rate Wallabies forward pack.

The Wallabies will certainly be more pleased of the two teams in what was a largely scrappy spectacle.

In their first outing since the disappointment of the World Cup almost one year ago it was far from a polished performance from the All Blacks.

Daugunu exposed their right side defence on several occasions. The All Blacks' kickoff receptions were sloppy, and they made errors under the high ball, admittedly in difficult conditions with the swirling wind gusting up 90km/h.

The Wallabies enjoyed the vast majority of the ball and field position, with the All Blacks surviving on 37 per cent possession and 36 per cent territory.

The All Blacks struck first through Barrett after slick quick hands from Damian McKenzie, Jack Goodhue and Shannon Frizell but the Wallabies were not to be dismissed.

Not for the first time, Wallabies halfback Nic White caused the All Blacks all sorts of problems around the fringes as he picked out defenders too slow returning into position to put his forwards into spacious holes.

The main issue for the Wallabies came at lineout time, with hooker Folau Fainga'a struggling to navigate the wind – one throw on his own line sailing past intended targets and into Codie Taylor's hands.

Defensively, the All Blacks were largely solid. There were clear tactics not to contest some breakdowns and instead back their ability to hold firm. Faced with lineout drives on their own line, the All Blacks repelled Wallabies several times.

Right on half time, the All Blacks should have pulled clear. Cane scooped up a loose pass from Fainga'a to set the counter attack into life which finished with Rieko Ioane crossing the line, and losing the ball in the act of grounding it with one hand.

That costly blunder proved something of an omen for Ioane as he was then caught infield on defence when Wallabies wing Marika Koroibete finished superbly in the left hand corner to claim the visitor first try, closing the margin to five points.

In the context of the result Ioane will rue that mistake and hope for a chance to rectify the mistake next week at Eden Park. 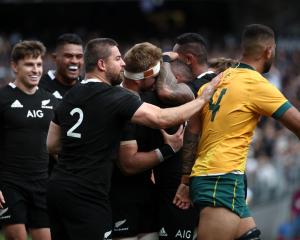