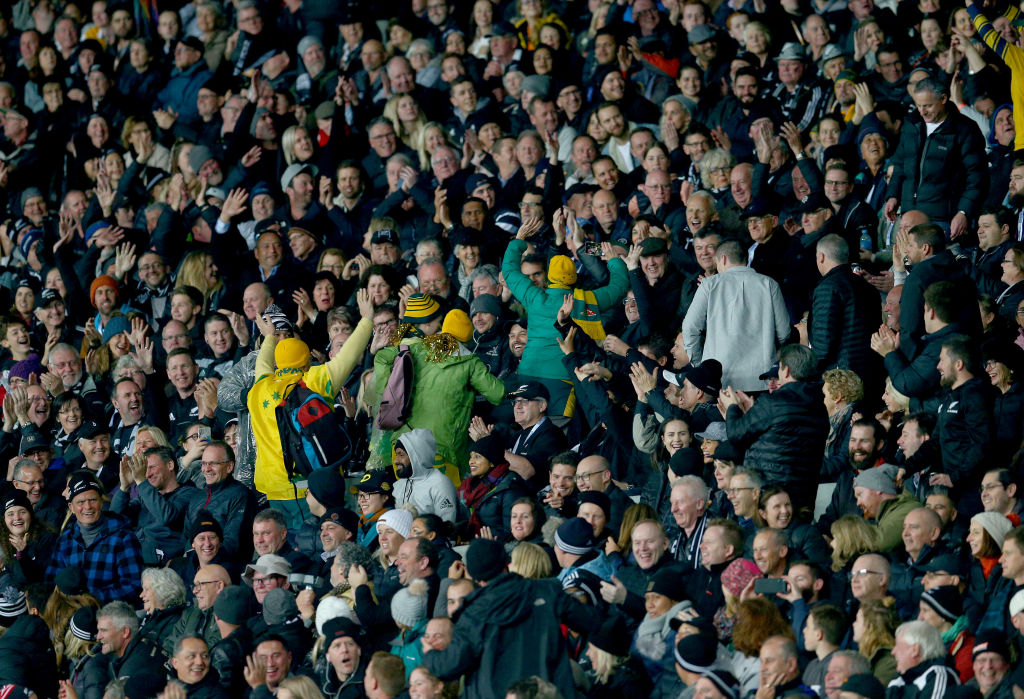 Wallabies fans leave before the end of the Bledisloe Cup match between the All Blacks and the Wallabies at Eden Park. Photo: Getty
Narcissistic, irrational and spoilt. Those were among the responses from Radio Sport listeners when asked to describe All Blacks fans in one word.

The question was put to listeners of the Radio Sport Breakfast in response to a column by New Zealand Herald writer Dylan Cleaver following the impressive 36-0 victory in the second Bledisoe Cup test at Eden Park on Saturday.

"It was only when the All Blacks started to assert real authority and staked a handy lead that the vibe changed from a sort of edgy quiet to something short of raucous celebration," Cleaver noted in his column after attending the victory.

"That's when the realisation hit: New Zealand fans aren't interested in the contest, they're just in it for the confirmation.

"They want their fears eased; their collective confidence boosted by the knowledge that the All Blacks remain in the seat of power.

"The joy comes not from the sport itself, but the result… as long as the result is the right one.

"It makes for a strange sort of atmosphere, with the expectation of victory always getting in the way of the thrill of battle."

Listeners to the Radio Sport Breakfast weighed in when asked to describe All Black fans in just one word.

"Narcissistic. Symptoms include an excessive need for admiration, disregard for others' feelings, an inability to handle any criticism and a sense of entitlement," said Mark.

"Searching" as ABs supporters it seems we are always searching for the perfect game and perfect performance which doesn't exist," said Mike.

"We thump Aussie 36 nil and still we get complaints about line outs, set piece and typical SBW talk. We are always left searching. We should just be happy and enjoy the moments, we get a lot of them," he added.

A sell-out crowd attended the test in Auckland as the All Blacks locked away the Bledisloe Cup for another year.

Fox Sports reported on Sunday the non-playing contingent of the Australian squad were abused by members of the crowd and had a full water bottle thrown in their direction.

No-one was hit, but one member of the Wallabies said that it landed close to them, Fox Sports said.

As a TV watcher of this game the worst feature for me and many others I have spoken to was the pathetic ex All Black announcer. He had no idea of how broadcasting on TV is different to Radio broadcasting. English soccer broadcasters have the task correct .
TV viewers do not want lessons from the rule book or descriptions of play that happened 2 minutes previous! NZ TV viewers are just as savvy about what is happening on the screen as the so-called "expert opinion announcer" And as for the bias in favour of the All Blacks - that was shocking. The announcers role is to relate the game in an unbiased manner - not the rubbish we viewers were forced to watch. It was a bit like the TV reporting of the swimming at the last Olympics by a certain well known ex-swimmer of some repute!