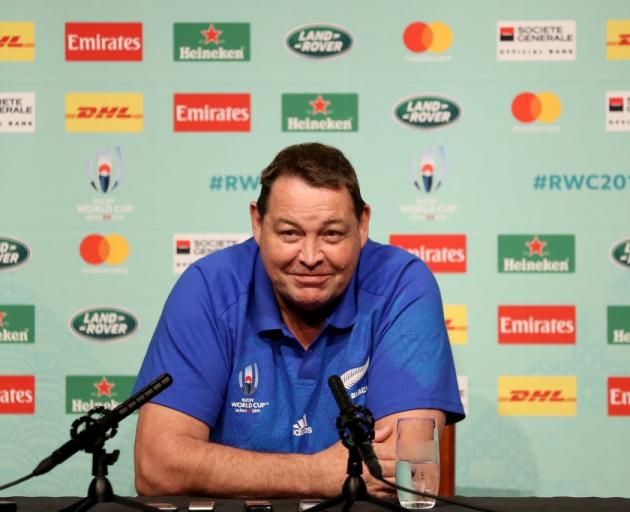 Steve Hansen. Photo: Getty Images
All Blacks head coach Steve Hansen has admitted he has some concerns ahead of the crunch Rugby World Cup opener against the Springboks — but the makeup of starting XV isn't one of them.

Hansen's run-on team for the clash between two of the tournament heavyweights has dominated talk since the All Blacks touched down in Japan, and although he was coy on who would line up in Yokohama on Saturday evening, Hansen insisted he "couldn't be any clearer".

"I don't think we'll muck around too much with the selections for this one. I'm very clear on what we want and so are the other two selectors. It's pretty good — it allows me to concentrate on other stuff which is nice, like training, and how we can get better," he said.

Hansen did, however, admit to at least one area of concern — a greasy ball — after days of soaring temperatures was followed on Monday by wet weather.

"The big thing will be the ball. That'll be the constant thing. The humidity will be high and the ball will be wet so skills will be really important," Hansen said.

"We've had a mixture of everything. A couple of days in the 30s and weather like today."

He wouldn't be drawn on whether there were any new injury concerns in the All Blacks camp, saying only that "at this stage, we have a full squad to pick from" and also kept his cards close to his chest when asked about the tactics planned for a resurgent South Africa.

Ever since South Africa were dealt a humiliating 57-0 thrashing in North Harbour in September 2017, the two sides have been almost impossible to separate. The All Blacks claimed a 25-24 victory in Cape Town a month after that thumping before South Africa hit back with a 36-34 triumph in Wellington last September.

A 32-30 All Blacks victory followed a month later, and the last game was the closest of the lot — a 16-all draw in July.

"We've worked hard on the execution of our attack game. We've done other things as well this week that I'm not going to tell you about but we think we've prepared as good as we could do," Hansen said.

"Both teams are pretty close — there's not much between the two teams. Our last game's probably a better reflection on where we can play, but South Africa will have improved too," Hansen said.

Nearly two months on from the stalemate in the capital, Hansen is expecting plenty from the Boks, including an aggressive defensive display.

"One thing I do know is South Africa will give us opportunities, because they roll the dice [defensively]. Are we good enough to take them? Will the weather conditions allow us to be able to take them? Those are things that we'll have to wait and see.

"Logic tells us whoever wins this game probably wins the pool, but as we found out in 2011 you don't have to necessarily win the pool to make the final – France did it the other way, so it's not the end of the world [if you lose], and it doesn't mean you're going to win the World Cup or get into the final if you win this game."