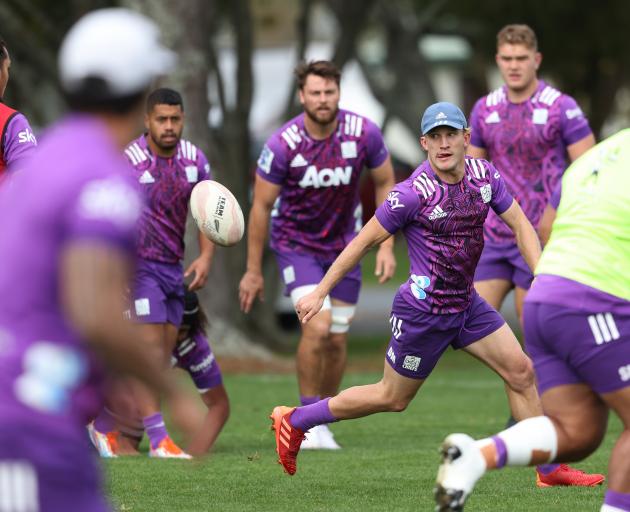 Damian McKenzie passes the ball during a Chiefs training session at the Ruakura Research Centre in Hamilton yesterday. PHOTO: GETTY IMAGES
The Chiefs have predictably brought back all their heavy artillery for the big battle.

The side will take on the Crusaders tomorrow night, in what will be the first and most probably the last Super Rugby Aotearoa final.

The Chiefs are going to have to do what has been pretty much a mission impossible in the past few years; beat the Crusaders in Christchurch and beat them in a playoff game at home.

The Crusaders have never lost a playoff game at the stadium in Addington under Scott Robertson.

But there have been a few speed wobbles this year.

The side lost at home to the Highlanders by a record margin of 33-12 and the last time the two sides met, the Chiefs won through a last-minute Damian McKenzie penalty.

However, the home team looked back in the groove when it defeated the Blues 29-6 a couple of weeks ago.

It has rested since then, having the bye last week, and has the comfort of bringing back All Black Braydon Ennor to the reserve bench. He comes back into the side after being out for more than six months after a knee injury.

Apart from the return of Ennor, the Crusaders have named the same team which beat the Blues last month.

The Chiefs will start Bryn Gatland in the number 10 jersey with Damian McKenzie back to fullback.

Luke Jacobson, Alex Nankivell, Naitoa Ah Kuoi and Chase Tiatia all return from injury, while Pita Gus Sowakula, who usually plays at No 8, has moved to the blindside flank.

The Chiefs have named loose forward Zane Kapeli on the bench after he had a bruising encounter in the match against the Blues last week.

Kapeli was picked for the Highlanders last year but never played a game.