By Adrian Seconi
0 Comments
Three years ago today some of the Big River Country line-up may have been having a nice cup of tea and a lie-down.

The thought of driving for an hour or so to practice or play rugby in Dunedin was not that appealing.

That barrier disappeared last season when Big River Country joined the women’s premier grade. And in just two short years the club has morphed into a powerhouse in the grade.

Big River shaded the star-studded University side 22-10 in the semifinal to earn the right to host the final against Dunedin, which dispatched the previously unbeaten Alhambra-Union outfit 30-10.

For the captain, Tegan Hollows, leading the side out at Clydevale today will be wonderful feeling. Because win or lose, rugby is actually the winner on this occasion.

"We had a lot of girls who definitely couldn’t be bothered travelling to town to play, so had just given up," Hollows said.

"The team just helps bring all those players back along with a lot of new ones to give it a go."

And give it a go they have, and with a lot of success.

"We’ve done a lot better than expected, and to be at home for the final is unreal."

Hollows put the success down to effort. Big River does not have a lot of Otago Spirit players swelling its ranks. But the players it does have are hungry to learn and happy to put in the mahi.

"Our girls have a lot of heart and ticker. The game we played in the weekend was the best game we’ve ever played.

"We definitely don’t have the names in our team — Varsity had a lot more in the Spirit squad than we do. But we just play for each other.

"We’re not a very individual team — we play as a whole and that really helps." 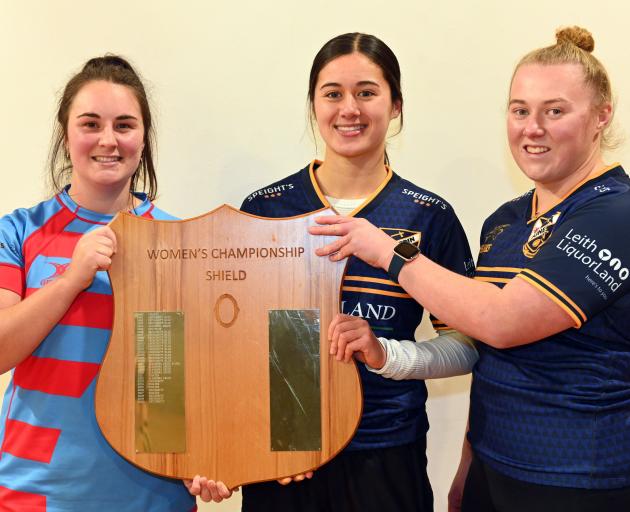 Big River Country captain Tegan Hollows and Dunedin co-captains Maia Joseph and Gemma Millar clutch the prize ahead of the premier women’s club rugby final today. PHOTO: LINDA ROBERTSON
That said, Hollows has been in fine form herself. She scored three tries in a round-robin game earlier in the season and bagged a double against University in the semifinal.

She has been packing down at the back of the scrum, but slots in at hooker for the Spirit.

Hollows played down her exploits, though.

"There are never ever any impressive tries from me, that’s for sure.

"I usually only have maybe two metres to dive over. No runaways for me."

Hollows is part of a tough pack which includes experienced prop Isla Pringle. Big River’s strength is up front, but Hollows said the backs were getting better each outing.

They will need to keep improving because Dunedin has a lot of strike power out wide. Outside backs Oceana Campbell and Sheree Hume do no need to use Google Maps to find the try line.

First five Maia Joseph has a wonderful passing game and will be hugely influential.

"They are just like Varsity — they’ve got a lot of big names in their side. They are going to be a very fast team, but if we can slow them down and put pressure on them like we did against Varsity then hopefully we can show what we can do."