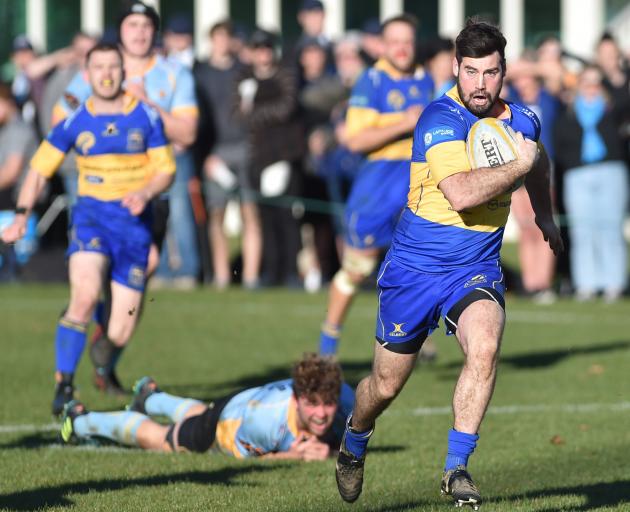 Taieri winger Marc Rooney makes a break during the Dunedin premier club rugby semifinal against University at the University Oval on Saturday. PHOTO: GREGOR RICHARDSON
Get ready for the Battle of the Saddle.

They both qualified with crushing 26-point wins in the semifinals at the weekend.

Taieri clipped its ticket to the premier final with a commanding 34-8 win over a below-strength University.

The victory secured the Eels a third final in three years and their eighth since becoming re-established in the premier ranks in 2009.

University capitalised on early nerves from Taieri, as winger Tom Rance proved a danger down the left flank, and Sam Clarke, the competition’s leading scorer, nailed a penalty to give the Bookworms a 3-0 lead.

The game drifted into a succession of penalties and yellow cards, and University lost some structure to its game as it relentlessly tried to barge its way through Taieri’s solid flat line of defence.

Taieri took the lead through a try to flanker Leroy Ferguson at the 20min mark, and when University lost a player to the bin shortly afterwards, the Eels ran in tries to props Kieran O’Sullivan and Thomas Hill, with rumbles up field, to take full advantage of the situation.

Holding a 19-3 lead late in the first half, Taieri then lost a player to the bin, but unlike its opponent, University was unable to profit from having a one-man advantage. Instead, Brayden Laing landed a penalty goal on the stroke of halftime to hand the Eels a 22-3 lead.

Despite having a player still in the bin, Taieri added to University’s woes when Tongan international Don Lolo touched down to stretch the Eels’ lead to 27-3.

A resurgence from University brought some reward through a try to prop Kilipati Lea, but lapses kept Taieri in control, despite the Eels losing a second player to the bin.

As the clock counted down, University again went a man down, Taieri capitalising through a try to winger Glen Beadle.

Taieri’s victory was sealed with a complete performance from its forward pack and its solid defence.

University was not helped by losing seven players to the Otago squad, but was well served by flankers Noah Perelini and Louis Magalogo and halfback Kieran McClea.

Green Island is one win away from breaking a 43-year drought following a commanding 44-18 win over Kaikorai at Miller Park.

Not since 1978 has the club been able to hoist the banner at the end of the season, but its semifinal performance indicated it will have at least an even chance in the final this weekend.

The Grizzlies controlled almost all facets of the game on Saturday, as the whole team stepped up in the absence of star players on Otago duty.

Green Island never really looked like losing, as it secured a flow of good possession from set phases and provided a defensive line that was rarely breached.

Playing into a stiff wind, the home side did well to get ahead 15-6 at halftime.

Flying winger Michael Manson — soon, pleasingly, to be seen in an Otago jersey — then gave Green Island complete control when he scored a lovely individual try from 60m out.

Finn Strawbridge, who controlled play nicely in the No10 jersey, scored two tries, and flanker Heath McEwan added a sixth for Green Island right near the end.

Manson and Jake Te Hiwi made plenty of ground for the Grizzlies, while yeoman locks Josh Clark and Woody Kirkwood maintained their usual immense work rate.

Harry Hansen scored a try and was a handful at hooker for Kaikorai, Jordan McEntee scored one of his trademark intercept tries, and Jake Russ did some sterling work at the breakdown.