Star earned two wins in a row for the first time this year when it beat Marist 38-31 in the premier club competition on Saturday.

On its home pitch at Waverly Park, Star led 21-12 at halftime.

Halfback Hayden Edgley was co-captain of Star in his 100th senior game.

Edgely scored one of the team's five tries and was named man of the match.

Star dominated the scrums and had an advantage at the lineout through quality jumpers Grayson Knapp, Josh Bekhuis and lightweight openside Lachy Springford.

No 8 PJ Leuluaialii had a big game for Star around the paddock, while Ethan Yeo is doing well at first five.

Centre Willie Tufui is in top form leading into the representative season.

Star manager Andrew McHugh said the game had a huge penalty count but was still a good game to watch.

Star now moves past Marist into fifth on the competition ladder.

The Hawks made a perfect start to this match by scoring four converted tries in the first 15 minutes.

The Hawks forwards and backs had displayed some great ball handling and offloads among the shell-shocked Blues defence.

Blues then gained some territory and possession and scored two quick tries. The game then calmed down as both teams’ defences tightened up during the 10 minutes before halftime.

The Hawks had a comfortable 28-12 lead, and both sides played well in the third quarter but neither threatened the tryline.

The Hawks were awarded a penalty within kicking range but that opportunity was turned down in favour of a lineout.

The lineout was lost and Blues stormed 75m up the field and earned their own penalty goal.

Captain Jay Renton kicked the match-winner which keeps Blues in the hunt for one of the two spots in the final on July 16.

Woodlands beat the Eastern Northern Barbarians 47-35 at Rugby Park It was a milestone game for lock Blair McKenzie who was playing his 200th game for the Woodlands premier side.

Midlands has the bye this week. 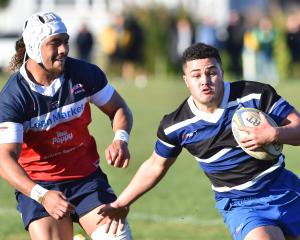