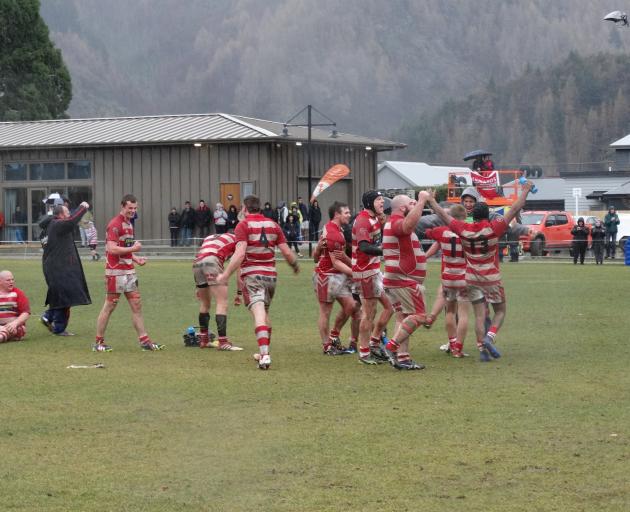 They produced a stunning second half effort to beat the Arrowtown Bulls 24-14 at Jack Reid Park after being 14-3 down at halftime.

Arrowtown started the match well and dominated the opening phases of the game.

It attacked the breakdown with purpose and made inroads into the Clutha defence. Arrowtown's lineout was on point and it stole plenty of opposition ball.

When Clutha ventured into Arrowtown's half, its staunch defence forced turnovers and its sensible kicking game turned the Clutha side around and made them attack from deep.

Clutha opened the scoring through a Zak Thoms penalty, but Arrowtown's territorial advantage saw it score the opening try through midfielder Adam Jackson.

Arrowtown played a smart game and kept Clutha guessing. Another botched Clutha lineout allowed Arrowtown attacking field position and it scored soon after through centre Izzy Nayaloga. Wallace converted and the Bulls went into halftime ahead and confident.

Clutha summoned all its resolve and put together a near-perfect second half effort to turn the game around.

Clutha found its physical presence and began to get the upper hand up front. Its support play was far better, and its decision making was less rushed and more controlled. Clutha kicked for territory well and had more possession in the red zone.

First five-eighth Kemp Skipper scored first for the travelling side with a well-executed dummy to squeeze in between two defenders. Thoms converted to give the Clutha fans hope. Clutha's backs found themselves in possession a lot more and found room to move. Winger Kane Teunissen finished off a well worked move to cross by the posts.

Thoms converted to put Clutha ahead 17-14.

Arrowtown then attacked solidly for more than 30 phases on the Clutha goal line. But Clutha's immovable defensive line held strong and repelled every attack the valiant Bulls side threw at it. Clutha No8 Simon Grant came up with a clutch turnover and hacked the ball 80m down the field to kill Arrowtown's momentum.

From there, Clutha regained possession and attacked the line. Clutha's scrum was dominant and forced three scrum penalties and a threat of a penalty try, but a try came soon after as Kurt Turnbull crashed his way over on the final whistle, locking in Clutha's fifth Countrywide title in as many years.

Arrowtown was the more dominant side in the first half, but lost its mojo in the second. Co-captains Malcolm Sutherland and Jacko Wallace were inspirational in the first half. Sutherland was a boss at lineout time and got through a mountain of work around the field. Wallace kept Clutha honest with his kicking from the base of the ruck.

They all played 80 minutes and, despite being out on their feet, they gave all they had right up until the final whistle.

Clutha made only one substitution in the game, so credit has to go to the players who battled it out for the duration.