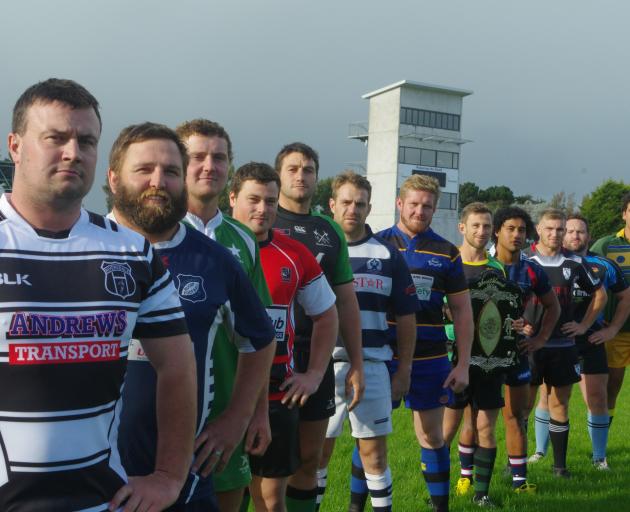 Southland's premier club rugby competition has been revamped and this year there will be 12 teams fighting it out for the Galbraith Shield. Showing the colours of their respective clubs this week before going to battle on the field later this month are (from left to right): Jarrod Lindsay (Riversdale), Brad Shaw (Wyndham), Alex Pierce (Waikaka), Sam Brame (Midlands), Brenton Howden (Eastern Northern Barbarians), Brayden Mitchell (Star), Michael Peterson (Blues), Scott Eade (with shield) from las
There will be 12 teams in contention for the Galbraith Shield when the premier division kicks off on March 23.

Experienced Southland referee Michael Hunter said having six premier games this season has given a boost to everyone involved.

"It will be interesting to see how everybody will measure up, referees included," he said.

Having six premier grade quality referees in the middle as well as two official touch judges is expected to stretch resources and require some methodical planning from those allocating the refs to which grounds at what times.

"Ideally, the curtain-raiser game refs will be available each week to get miked up to run the touch in the main game. We had three sets of coms last year, and we just got three new sets so we're good to go."

Hunter said referee numbers would be similar to last year.

"We could always do with more. The availability of our secondary school aged referees to ref the junior grades won't be known for a few weeks yet."

There will be two pools of six teams that play each other once, and then the top three from each pool will contest the Walter Galbraith Shield, playing each other home and away before semifinals and finals.

The bottom three from the two pools will follow the same format, to contest the Ack Soper Shield.

This season's format will double the pool of players at the top level, while representing their own communities.