Crescent signalled its intentions this season with a confidence-boosting 27-21 win over fierce rival Clutha, in a scrappy but intense game at Kaitangata.

Possession was shared evenly in the first half as both sides made the most of the ball.

Crescent’s ball retention was superior, and its patience forced Clutha into defensive blunders. The home side went into halftime 22-14 ahead.

The second half was just as even and both sides enjoyed periods of possession. Clutha could not turn its time with the ball into points and silly errors handed Crescent the ball and territory.

Crescent led 22-21 late in the second half and a try before fulltime sealed the result.

West Taieri continued its positive start to the season with a strong 43-21 win over Heriot in Outram.

West put on a clinic in the first spell and went into halftime 36-7 ahead. The home side dominated the forward exchange early and made plenty of metres in the midfield.

The second-half response from Heriot would please management but West Taieri had too much of a points buffer.

West’s captain Conor Beaton and Conner Jenkins were strong in the pack. Prop Ethan Hippolite helped himself to another brace of tries. Lochlan Kennedy and Will Scorgie were the best of the backs. Logan Cornish at first five-eighth and centre Clayton Buchanan were Heriot’s best.

Owaka retained the Bill Mitchell Memorial Trophy with a tough 29-20 win over Clinton at Owaka.

Owaka midfielder Laumua Ieru scored a brace of tries and was strong. Cameron Burgess and Mafi Demont were the best of the Owaka pack. Russell Moloney was a pillar of strength up front for the losing Clinton side.

Clutha Valley dominated Toko from start to finish with a huge 59-0 win over the home side at Milton.

Toko had a rough week with illness. 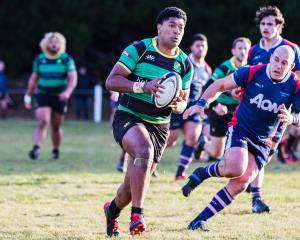