Excelsior too strong for Athletic-Marist 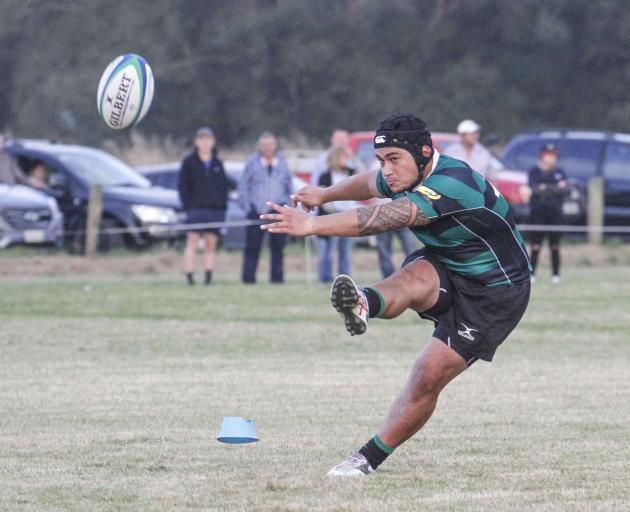 Maheno goal kicker Sam Tupou looks to convert one of Maheno's tries against Valley at Maheno on Friday night. PHOTO: PHIL JANSSEN
Excelsior gave notice that it would be a contender for Citizens Shield honours this season with a comprehensive 63-15 win over Athletic Marist at Whitestone stadium in the feature game on Saturday.

Excelsior which had showed encouraging development at the end of last season ran in eight tries in an enterprising display.

Athletic led 8-0 after the first quarter, after Mason Kinzett kicked a penalty and fullback Simon Lillicama scored an unconverted try.

Excelsior then piled on the points to lead 25-8 at halftime.

Excelsior first five-eighth Thomas Moysey made sure possession was put to good use, converting tries to No8 Samuel Bubiau, who got two, fullback Hamish Slater, as well as kicking some penalties to take his side to a comfortable lead.

Athletic Marist in the second half was restricted to a try to Vaa Mafi which was converted by Kinzett in the 48th minute of the game.

Excelsior centre Taina Tamou inspired his side dominating the midfield in the second half. Moysey converted a Tamou try after adding an early second-half penalty. Slater's second try came after an Oscar Pamment break on the Excelsior 22m line and the Moysey conversion took Excelsior out to a big lead.

Tamou continued to test the opposition defence, finding holes, and a Moysey try and conversion made it 49-15. Tries to Tarn Crow, who had shifted from right wing to halfback, and winger Tayne Russell and Moysey's conversions took the Blue Bulls out to a 63-15 victory.

Maheno started its 2019 Citizens Shield season with an upset 19-0 win over last year's champion Valley, on Friday night at the Maheno Domain. Maheno coaches Jason Forrest and Josh Clark were more than happy with the result.

"To keep Valley pointless over the 80 minutes was a great achievement.It was really a scrappy game but up front it was brutal. There were some banged up bodies after the final whistle," Forrest said.

Maheno produced a rigid defence in the second spell and although there were small mistakes they had the motivation.They were playing for young winger Zac Johnson, who was killed over the summer, and inspirational captain Hayden Tisdall, who was playing his 100th game for Maheno.

Halfback Robbie Smith was impressive behind the pack up to his best form.

Ten minutes into the game No8 Tisdall put his side in front with an unconverted try and 15 minutes from halftime, Josh Clark touched down for Sam Tupou to convert and give Maheno a 12-0 halftime lead. The only scoring in the second half was a try to Smith. Tupou added the conversion.

Old Boys virtually had the game against last season's finalist Kurow won by halftime, leading 24-0, and went on to win 29-10.

Late first-half tries to Omega Masoe and Sale Pi'i, one of which was converted by Lemi Masoe, took Old Boys out to a 24-0 lead.

Kurow came back with unconverted tries to Paddy Henwood and Sam Fleming before Funaki touched down for his second for Old Boys.