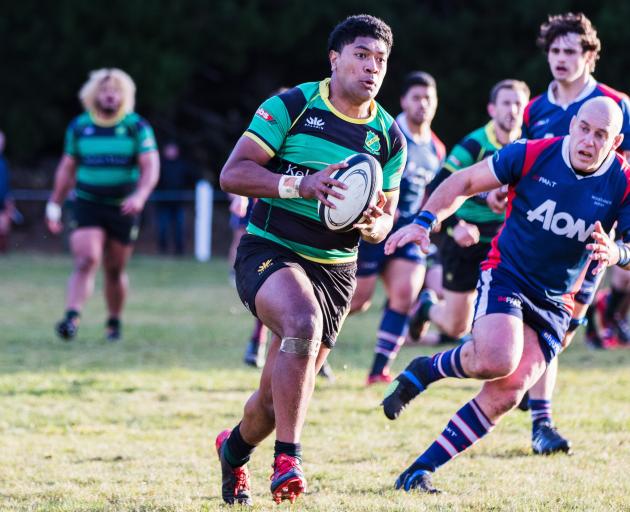 Woodlands centre Tevita Latu looks to get away from Woodlands hooker Jason Rutledge at a match at Centepoint Park in Invercargill last month. PHOTO: DEBBIE FAHEY
Woodlands, Marist, Pirates Old Boys and Star are all still in contention for the Galbraith Shield final heading into the last round of matches tomorrow.

Of the possible outcomes for the final, the most likely is Woodlands will finish off Marist, which would mean Pirates Old Boys would only require a bonus point against Star at Surrey Park to hold on to second place.

A straight final will be played next Saturday.

The Eastern Northern Barbarians will host Blues in a dead rubber match at the Gore Showgrounds this Saturday.

The Barbarians have performed well this year, considering the young team they have had after a host of experienced players retired.

The Barbarians are the only team to beat Woodlands this year. Woodlands is already assured of its spot in the final.

Blues have had a tough season after winning the Galbraith Shield last year. They had a bunch of their players move out of town. During the early weeks of this season they had a long list of key players go down injured. Some of those injured players returned to action last week, and the team put in its best performance at training which followed through to a win over Marist.

Midlands is already guaranteed of hosting the Ack Soper Shield division one final in Winton against either Te Anau or Edendale.

Edendale needs to earn five competition points in its last round robin match tomorrow if it wants to be assured of playing in the final.

Edendale is on its home turf tomorrow against Midlands.

The three teams still in with a chance in the division two Gerald Dermody Shield are Pioneer, Waikiwi and Tokanui.

Pioneer will host the final next week, and is favoured to finish off Waikiwi in Gore tomorrow, while Tokanui should progress past Albion.

Waikiwi knocked Mossburn out of final contention last week with a 31-14 win.

In the CJ Soper Trophy, the winner of the Waiau Star and Drummond Limehills Star game this Saturday will advance to the final in Bluff.

Collegiate has won all seven of its games in the bottom section of division two.

Collegiate will host the final on August 15 against either Woodlands B or Marist B. Woodlands B will likely need to beat Collegiate tomorrow.

The Blues women’s team have won all five of its games in the Sunday competition this year while Marist has won three.