Leader Marist made to work hard against Blues 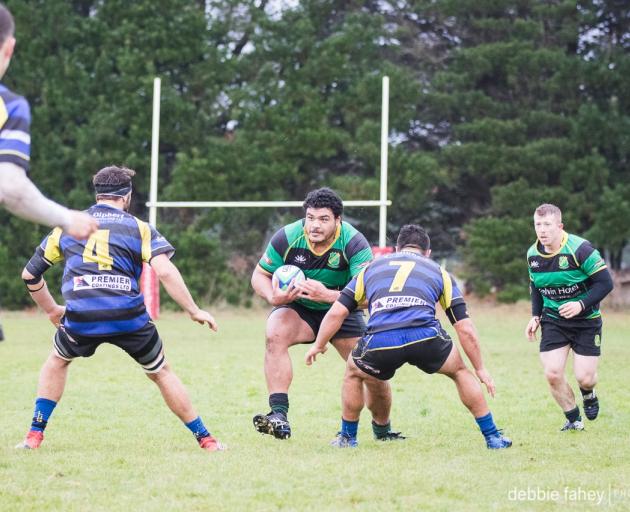 Marist No 8 Pasillo Tosi goes forward in his side's match against Blues in Invercargill on Saturday. PHOTO: SUPPLIED
Woodlands continued its resurgence in the Galbraith Shield Competition on Saturday with a 15-14 win over Eastern Northern Barbarians.

Its defence on the try line was strong while the Barbarians could not finish off. Midfield back Todd Wells was outstanding for the Barbarians.

Competition leader Marist had to work hard to beat Blues 14-3 at Miller St. With driving wind and sideways rain, it was difficult for both teams to get much going on attack and field position was important.

Blues kicked an early penalty goal, and continued to force the pace but Marist was outstanding with its defensive line speed and tackling. That defensive effort was rewarded when Javaan Fa'amoe Ioane latched on to a loose ball to run 50m and score.

In the second half Marist extended its lead to 14-3 when Keanu Kahukura showed his power to barge over from close range. Marist dominated territory for the remainder of the game but could not finish off line breaks.

Blues' performance was mixed, although Brandon Rodgers and Conner Morrison got through a power of work.

Star earned a confidence-boosting 41-22 win over Pirates Old Boys in rough conditions at Oreti Park. Star started strong with an early try to Hayden Edgley. The teams traded scoring blows through until half time, with Star ahead 13-12. The Hawks scored a converted try soon after the resumption but Star stepped it up a gear to secure the bonus point win. Loose forward Jordan Stewart and halfback Edgley continued their excellent form this year. Joe Gillies played well in the midfield, and combined well with his brother Allan Gillies and Junior Lafoga on the wings.

In the Premier B club competition, Edendale ruined Te Anau's club day on Saturday beating the home side 37-0.

Ace goal kicker Devon McLeod landed a 40m penalty in the opening minute, and from the restart Bram Fodie scored a try out wide. After 20 minutes Edendale had racked up 22 unanswered points.

The Te Anau forwards then got into their work but outstanding team defence from Edendale kept the locals scoreless.

Te Anau continued to apply pressure in the second half but Edendale was hungry on defence and kept scoring points.

Midlands had the better of possession and territory in the first half but a failure to execute some finer details prevented it leading by more than 6-5.

It lifted the tempo in the second half but momentum switched and Waikaka had a long period of attack. It managed to score near the end to earn a bonus point.

Midlands captain Sam Brame had another strong game at No8 in his 50th appearance for the club. Midfielders Noah and Crete Waaka impressed, as did new boy Mark Tree.

Wyndham had a 33-5 win at Riversdale. Wyndham battled away into a strong breeze in the first half and then used it to its advantage in the second half.