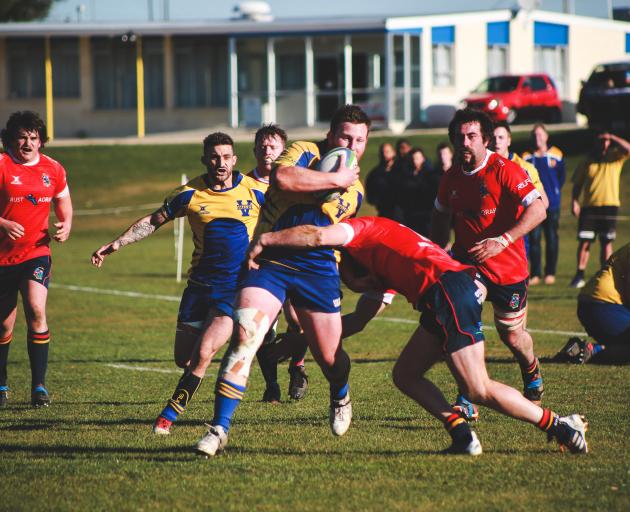 Valley forward Jake Greenslade takes the ball up in last week’s semifinal match against Kurow.PHOTO: REBECCA RYAN
Maheno is seeking to complete an unbeaten season when it takes on Valley in the final of the Citizens Shield tomorrow.

If it manages to bag the win, it will be the first time in its history it has managed to go through the competition and not lose a game.

Maheno has picked up sevens wins and a draw from its games, fighting out an 11-11 stalemate with Valley early on.

It has the added motivation of winning the Citizens Shield for the second consecutive season.

The club must go back to 1989-90 to the last time it won the shield in successive seasons.

For Maheno coach Harry Semple, who at 24 may be the youngest coach of a senior team in the country, it will be the completion of what has been a very twisted journey.

He moved from the North Island to take up a position as development officer for the North Otago Cricket Association.

He thought he had applied to coach Kurow, but ended up being contacted by Maheno and has helped the side get through to the final.

"My brother, James, is involved in rugby, having played for North Harbour and Counties-Manukau. I was lucky to get involved in getting an internship with the Bay of Plenty. From there, I went to Grafton in Australia, playing under-21, but unfortunately broke a leg," he said.

“I originally got a contact from Mike Hore at the Maheno club. Apparently my CV was also floating around up at Kurow, but I got the nod from Maheno.

"To get that position was unreal and I was pretty nervous having to coach many who were more experienced, but I soon found that we began to learn off each other and it seems to have paid off. Tomorrow will tell the real story."

Semple is not going to have long to digest the game, whether it is a celebration or commiseration.

He starts a new job with the Bay of Plenty Rugby Union on Wednedsay as a junior development officer.

Carter is set for a tough game.

"After all, they are unbeaten this season and they’ll go in as favourites. But it will be interesting to see how many people come to the game considering the current situation. The day of the final we’ll just do what we have done every other Saturday.

"Let’s face it, Maheno has come a long way since we last played them. We’re expecting a good old ding-dong and our backs will be under pressure to shut down Maheno’s classy backline.

"Matthew Vocea has plenty of experience, Jake Matthews plays well and 18-year-old Ben Paton has real attributes out in the threequarters."