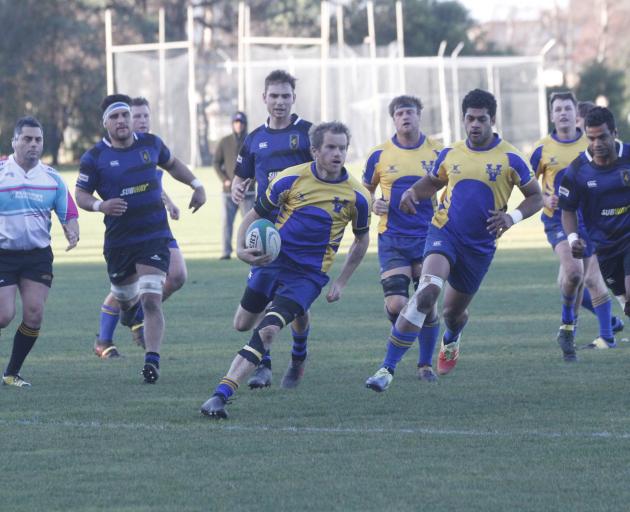 Valley first five-eighth Brad McKenzie heads towards the tryline in the match against Excelsior at Whitestone Contracting Stadium last Saturday. PHOTO: KYLE BECK
The North Otago Rugby Football Union is not sitting on its hands as more defaults hit the competition.

The third default of the season occurred last Saturday when Old Boys defaulted its game against Athletic Marist.

Ironically, Athletic Marist had already defaulted a game against Old Boys earlier in the season and had also defaulted against Excelsior.

It is not easy fielding teams in this day and age as work commitments, injuries and general lack of player numbers hit sides right across the country, not just in North Otago.

The North Otago union met senior Athletic Marist officials to discuss its struggles in fielding a premier side.

"There are obviously concerns that Athletic Marist would not be able to muster enough players to fulfil the remaining four games in this year's Citizens Shield," North Otago chief executive Colin Jackson said.

"It is hoped that the potential of the Athletic Marist team will come to fruition during the final round and a strong squad can be gathered for the next season."

Jackson said many players had work commitments at the Pukeuri freezing works and had to do a Saturday shift.

This shift was coming to an end and it was hoped the players would be freed up to play. Some games earlier in the season involving Athletic-Marist have been pushed back to a 4.30pm start to enable some players to take the field after work.