Wakatipu back to near-full squad 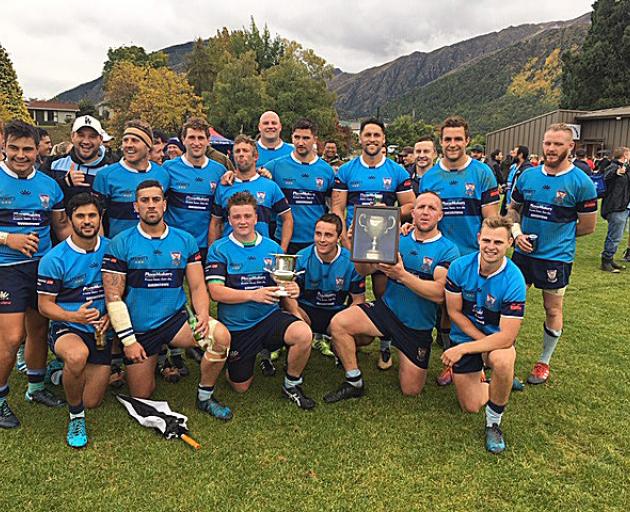 The Wakatipu players celebrating with the White Horse Cup after beating Arrowtown earlier in the seaon. PHOTO: PAUL DWYER
Wakatipu will tackle Arrowtown at the Queenstown Rec tomorrow with a team beginning to resemble the side that completed the first round of the Central Otago premier club competition undefeated.

A nightmare sequence of injuries dating back to the White Horse Cup defence against Maniototo, when four players dropped out with injury before halftime, has had Wakatipu coaches Brad Robertson and Brett Anderson in despair.

No fewer than 18 players - nine backs and nine forwards - have been unavailable for varying lengths of time through injuries or suspension over the past month.

Backs still on the injured list are Tom Kelly (head injury), Mark Te Whaiti (head injury) and Stephen Bruce (out for the season with a serious shoulder injury).

The only forward still on the injury list is Toi Roberts, with a hand injury.

Before the plague of injuries struck, Wakatipu completed the first round with a handsome record of five wins and one draw, and sat just one point behind competition front runner Upper Clutha on the points table.

Coach Robertson said it was a relief to have a near-full squad to choose from again.

"It's been a quite extraordinary month," he said.

"We've really had to dig deep to get 15 players on the field but, hopefully, we'll be right from now on."

Wakatipu won the first-round clash against Arrowtown 20-19, when Blues fullback Michael Collins was suddenly available and had a major influence on the outcome.

Arrowtown has endured frustrating injury problems itself, having co-captains Jackson Wallace and Malcolm Sutherland sidelined for a couple of weeks.

They were back in action last Saturday in the 50-13 romp against Cromwell Cavaliers and should have a major influence on tomorrow's game.

Neither side will want to lose because Alexandra is nipping at their heels, three points behind Wakatipu and five behind Arrowtown.

The Goats won the first-round clash 52-5 but Alexandra has made vast improvement since then, as its recent victory over Arrowtown demonstrated.

Remarkably, this will be Alexandra's third Cup challenge of the season, having extended both Arrowtown (29-8) and Wakatipu (24-17).

Upper Clutha will host Cromwell Cavaliers at Wanaka and should continue on its winning way.