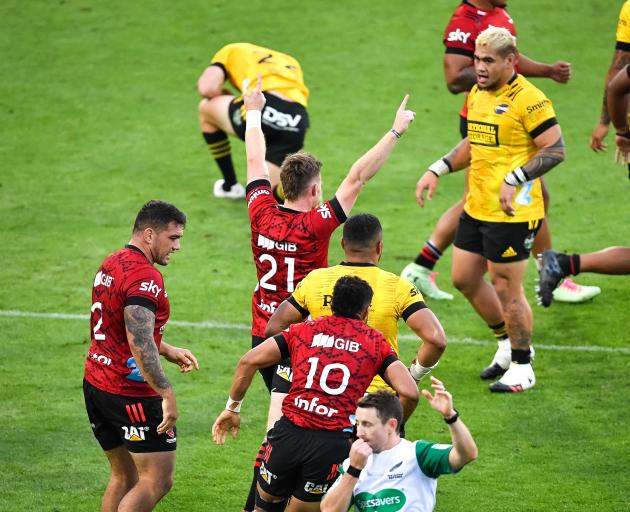 Mitchell Drummond and the Crusaders celebrate their golden point win over the Hurricanes. Photo: Getty Images
For the second match in succession Super Rugby Aotearoa needed golden point extra time to find a victor. The Crusaders, thanks to David Havili's clutch drop goal, prevailed over the Hurricanes in Wellington on Sunday afternoon but the win came at a cost, and will do little to damper the sense Scott Robertson's men have quickly come back to the pack.

One night after Damian McKenzie nailed a penalty to snatch victory for the Chiefs in Dunedin in extra time, the bottom of the table Hurricanes pushed the Crusaders to the brink to reveal more cracks in the defending champion's armour.

Two weeks ago the Crusaders, unbeaten through their first four matches of the season, were as good as anointed champions.

The inspired Highlanders performance in Christchurch last week seemingly cracked the code, and despite losing this match the Hurricanes proved the Crusaders are well within reach.

Robertson will be relieved to escape with victory that pushes the Crusaders eight points clear of the second placed Blues but there will be major concerns after All Blacks midfielder Jack Goodhue (knee) and prop Joe Moody (ankle) departed inside 25 minutes with what appeared to be serious injuries.

Ardie Savea produced an inspirational shift for the Hurricanes. Playing in the seven jersey but from the back of the scrum on his side's ball, Savea lasted 22 minutes of the second half on one leg after a heavy collision with Sevu Reece and, yet, he was still the best player on the park during that time. With ball in hand, with offloads and at the breakdown where he stole several turnovers, Savea was superb.

Locked 27-all after three tries from both teams, Jordie Barrett pushed a 63-metre penalty attempt wide with seven minutes left in regulation time. Locals chanted "Jordie, Jordie" but while Barrett had no trouble with the distance, his cannon boot could not break the deadlock.

Richie Mo'unga had a chance to steal victory, too, but his 79th minute dropped goal pushed right past the posts, and so it was left to Havili to step up.

The Crusaders arrived in the capital with a point to prove after being embarrassed at home last week in the shock loss, their first of the season, to the Highlanders.

Racing out to a 14-3 lead following a brace from George Bridge - the second from a Codie Taylor pass that looked decidedly forward - the Crusaders seemed as though they would comfortably rectify last week's wrong.

Losing Goodhue and Moody inside the 25 minutes forced the Crusaders to turn to their bench early. The Hurricanes, though, were always in the fight, despite their lineout misfiring and lacking urgency to the cleanout.

Dane Coles was the everywhere man for the Hurricanes, the All Blacks hooker frequently making turnovers, carries and cleanouts in a compelling battle with the in-form Taylor, who was equally effective over the ball.

Savea, Xavier Numia and James Blackwell were prominent in the Hurricanes pack that more than held their own against the vaunted Crusaders scrum, too. That parity allowed 19-year-old prospect Ruben Love, in his maiden start at No 10, to show glimpses of his potential by challenging the line on several occasions.

Barrett's influence in assuming much of the playmaking and kicking duties helped take pressure off Love.

Peter Umaga-Jensen, restored to start at centre, was a handful with his angled running lines causing problems but midfield partner Ngani Laumape and former All Blacks wing Julian Savea crossed to bring the Hurricanes level.

Laumape had a brain explosion just before the break by elbowing Scott Barrett off the ball which earned him a yellow card – a familiar issue for the Hurricanes after they conceded two in their loss to the Blues last week.

Fortunately for the Hurricanes, Laumape's yellow card did not prove costly with his side scoring first after the break through Wes Goosen to steal the lead and ramp up pressure on the visitors.

While rattled at times, the Crusaders responded with Mo'unga laying on a try for Sevu Reece with another marginal pass to draw level and heighten tension which carried through to extra time.

As is often the case with the Crusaders, they found the necessary composure to do what it takes when it matters most, but the Blues in Christchurch next week shapes as an intriguing gauge of where the competition is at.