Cup can go on without ABs: IRB chief 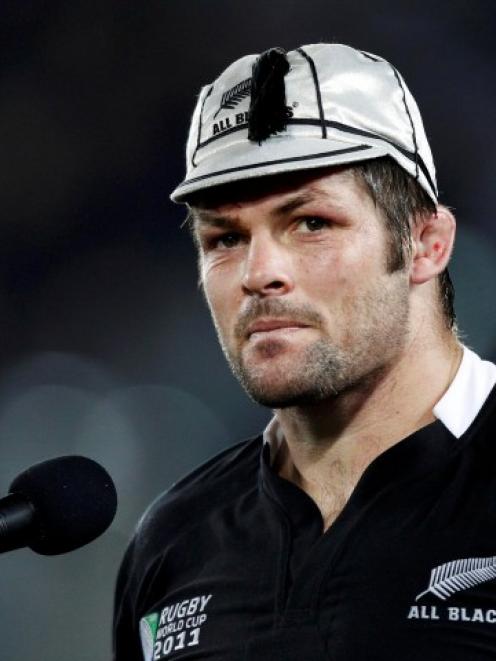 All Black captain Richie McCaw received his 100th test cap after the World Cup match against France in Auckland. Would the tournament survive if the All Blacks did not participate? Photo: REUTERS/Bogdan Cristel
The World Cup would go on without the New Zealand All Blacks if they chose to boycott the 2015 tournament, International Rugby Board (IRB) chief executive Mike Miller says.

"Does the World Cup need the All Blacks? It would be good for the All Blacks to be there," Miller told New Zealand's Radio Sport on Tuesday. "Everyone is replaceable."

Tew said the NZRU had lost NZ$13.2 million in reduced revenue from sponsorship and ticket sales from a shortened Tri-Nations and lack of an end-of-year tour because of the tournament.

"He (Tew) is on the IRB Council, he's been involved in all of the decisions that we've made for the last five or six years, so he knows what's going on. It's the IRB Council that decides where the money goes," Miller said.

"Of course he doesn't talk about the $12m that the NZRU gets from the IRB over the four-year cycle."

Miller said the timing of Tew's comments, which were supported by Australian Rugby Union boss John O'Neill, was "not brilliant" and that they were both aware of the IRB's decision to re-evaluate the World Cup commercial model after the current tournament.

"We know what the issues are, which is why we had a conference on the Economics of the Game earlier this year, which Steve Tew was at," Miller added.

"The conference said after rugby World Cup, we'd look at the outcomes and whether we'd need to change the model on the commercial rules, the distribution of funds, and on the timing of the World Cup."

The IRB has also come under heavy criticism from smaller nations about the scheduling of the tournament, with Samoa centre Eliota Sapolu Fuimaono particularly vociferous in two outbursts via social networking website Twitter.

Miller, however, said the realities of the tournament meant they had to plan the schedule to meet the demands from broadcasters, whose payments helped the IRB invest in the smaller countries.

"The tens of millions of dollars that we invest in the so-called minnows comes from Rugby World Cup, from broadcasters who want to have the big games at the weekends," Miller said.

"There's a simple answer. You can reduce it to 16 teams, then you'll have a more even schedule. But we wouldn't want to do that.

"It's better than it was last time and we'll make it better next time."