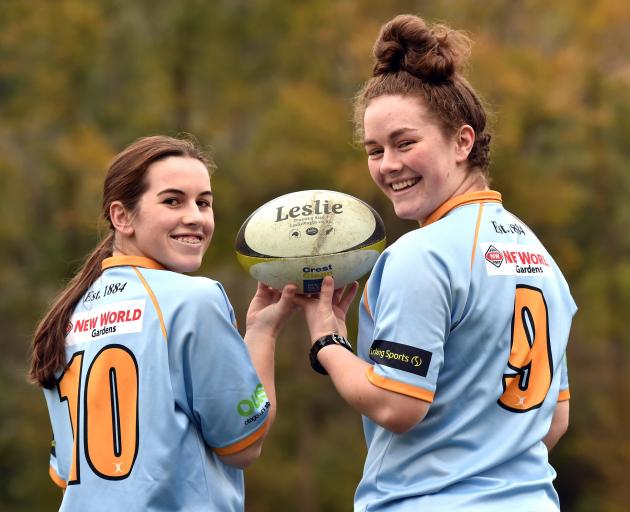 University women’s rugby players Rosie Kelly (left) and Rosie Buchanan Brown. Photo: Peter McIntosh
The season has been rosy for University — or should that read twice as Rosie.

In a star-studded team, two younger players have been making great progress in pivotal positions.

Eighteen-year-olds Rosie Buchanan-Brown and Rosie Kelly have helped the team storm into the today’s women’s club final against Pirates.

University went unbeaten during the round robin and dispatched Alhambra-Union 65-10 in the semifinal last Saturday.

The two Rosies have quality players around them including flanker Georgia Mason, second five-eighth Michaela Baker and centre Sam Hollows. But they have held their own and guided the team around the park nicely.

Buchanan-Brown has provided some sharp service. The halfback is from Marlborough and started playing Rippa rugby when was 5.

She grew up playing against the boys. The physical education student played on the side of the scrum when she played with the boys. But her skill set is better suited to halfback in the women’s game.

The diminutive Kelly, who hails from the West Coast, looks more like a halfback and has played most of her rugby in the position. But she has shifted out one place this season in the interests of the team.

The health science student is still honing her tactical kicking skills but the transition has been relatively smooth.

The fact there is a Rosie at halfback and first five-eighth has not caused any confusion.

"Not yet. But some of the forwards have said we need to sort out a nickname," Buchanan-Brown said.

Pirates beat University 27-10 at Kettle Park last year to claim the crown. Pirates was the favourite in 2016 but was pipped when University scored late to win 17-13.

There is a plenty of history between the teams but University has dominated its rival of late, scoring a 51-7 win earlier in the season followed by a comfortable 48-7 win in May.

Despite starting as a strong favourite, Kelly said there was still a healthy dose of anxiety in the camp.

"It is definitely more intense this week because it is a bigger game," Kelly said.

"Just the word final makes it more stressful, I guess, and the fact there will probably be more people watching.

"But we’ve prepared the same and we’re trying to keep things as normal as possible."

Coach Daniel Johnson said the forwards would have to pick up the slack.

"Our backs will be up with them. It is just Varsity are very fit and we will need to control their loose forwards," he said.

"If we can contain them then we can slow their game down."

Pirates will lean heavily on first five-eighth Sheree Hume and veteran openside flanker Vanessa MacDonald for inspiration, while loose forward Biddy Sefton will shift out to the midfield to plug the gaps left by Muir and Moata’ane.