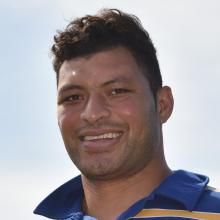 After all the drama in recent weeks, University and Taieri have made it through to the final again.

Taieri made use of its extra life earlier in the playoffs and defeated Harbour, while University needed a last-minute fumble to hold out Southern.

Both teams’ fate rested on a thin strip of territory about half a metre from University’s line.

The joust only lasted about a minute but it was decisive.

Southern bashed away an inch at a time, hoping to find the smallest crack in the defence to seal what would have been a wonderful come-from-behind win in the final moments of the semifinal at Logan Park on Saturday.

It had slipped behind 24-15 with about 25 minutes remaining.

University had scored a tremendous try.

Right winger Kieran McClea had fumbled a high kick. He perhaps had one eye on the gaps in front of him when he came up with the error.

Fortunately for him it dribbled backwards.

By the time he had regathered the defence had closed, but he thrust out a fend and poked his opponent out of the way.

The field opened and he set off down the touch line. Fullback Jermaine Pepe positioned himself perfectly for the inside pass and then got the ball to halfback Graham Urquhart who ran in to score.

Moments later impressive No8 Sean Withy was scampering down the same touchline. He found support on the inside but the try went begging when the final pass was not made.

Had University scored then, it was curtains for Southern.

Falling behind had a liberating impact on Southern, though. It was forced into playing a bit more rugby.

The big boys got their hands on the ball. Skipper Jermayne Maike was immense.

He hit the ball up with purpose several times during a phase which also featured strong runs by the other large men in the pack.

Veteran No8 Mika Mafi banged it up. Tofatiumoana Solia made a burst.

Eventually Mafi was close enough that he could not be stopped.

Mackenzie Haugh, who scored two first-half tries, the second of which was an acrobatic effort in the corner, knocked over the conversion to close the gap to 24-22.

Southern then had an opportunity to go ahead. University centre Giovanni Leituala got himself binned with 15 minutes remaining.

But Haugh missed from about 35m out. It proved very costly.

University did an amazing job of slowing down the game and holding on to the ball. The students really did not give Southern a decent opportunity to run at their backline which was down a man.

The time drifted away until both teams were locked in a desperate battle over that thin strip of grass with a minute to go.

Southern seemed destined to score but ran out of patience. Replacement halfback Tala Fagasoaia inexplicably tried to leap over the ruck to score.

He lost it forward and that was that.

Late tries to Kori Rupene and Glen Beadle helped secure Taieri a place in next week’s final, when it defeated Harbour 25-8 at Watson Park.

Both tries came in the final 10min, Beadle's bringing the curtain down on an epic encounter between two worthy semifinalists and honouring the memory of Taieri life member and past NZRFU president Dave Johnston, who died recently.

Despite dominating territory throughout the first half, Taieri was guilty of over-exuberance leading to a raft of turnovers that gifted Harbour a high percentage of possession, but it struggled to journey far enough into Taieri territory to become a threat.

As the first quarter drew to a close, Harbour lost the first of two players to the sin bin. But being a man short had little impact on the side's commitment.

Both sides remained scoreless until the 30th minute when Harbour, back to 15 men, cut loose with a clever kick through, leading to openside flanker James Tomkinson diving over for the try.

This sparked Taieri into life as it penetrated deep into Harbour territory for hooker Brady Robinson to muscle over for the try. The Corey McKay conversion allowed it to take a 7-5 lead into the break.

Two penalty goals to McKay early in the second half stretched Taieri's lead to 13-5, after which both teams went hammer and tongs without any addition to the score until an eventful final quarter that brought about Harbour's second yellow card and a high level of intensity.

Harbour played like men possessed, closing the score up to 13-8 through a Logan Allen penalty goal.

But gaps began to appear out wide that Rupene and Beadle capitalised on as Taieri booked a date with its season-defining moment at the stadium next Saturday.

Taieri was well-served up front once again by its pack, and with Brayden Laing displaying his versatility as a halfback, first five-eighth and goal-kicker. Likewise, Harbour’s pack remained in the fight throughout with Abraham Pole, Hagen Free and Tomkinson all key components.