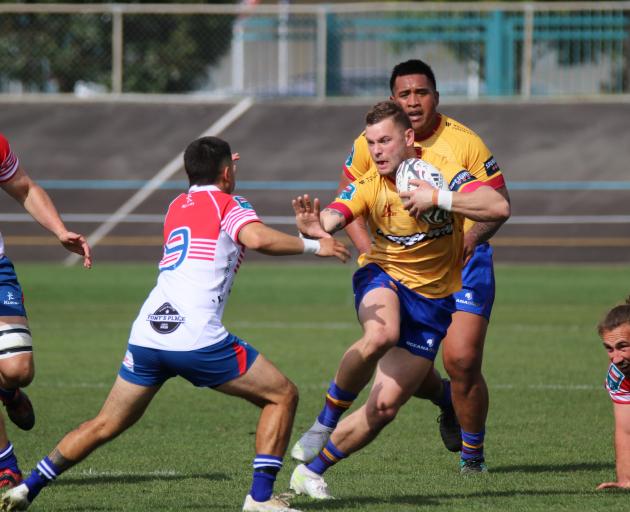 North Otago centre Hayden Todd has prop Kelepi Funaki in support as he looks to fend Horowhenua-Kapiti halfback Jack Tatu-Robertson during the Heartland Championship rugby game in Levin on Saturday. PHOTO: DARRYL BUTLER
This has to be a "flush the dunny" game, to quote former All Blacks coach Steve Hansen.

North Otago will certainly hope to play much better over the next six weeks than it did on Saturday.

If it does not, there is absolutely no question the Meads Cup will not be staying in Oamaru.

The Old Golds produced a bit of a stinker in Levin, falling 25-17 to a Horowhenua-Kapiti side that was decent but hardly fearsome.

It was almost a case of the visiting side losing the game, not the ‘Nua’ winning it.

North Otago did some things well. The scrum was dominant, and there were glimpses of what appears to be some real attacking potential in both the forwards and the backs.

It is just a pity the good was outweighed by the bad.

North Otago’s defence was again erratic, but the major reason for the loss was the jaw-dropping number of mistakes and turnovers.

Time and again, the Old Golds would see a promising attacking move break down thanks to an error or mis-step that handed the ball over.

It meant they had very little opportunity to get up a head of steam and, apart from the first few minutes and a lovely spell just after halftime, they were on the back foot.

Funaki scored the opening try from a pick and go but the rest of the first half belonged to Horowhenua-Kapiti.

Playing with the wind, and with sevens star Andrew Knewstubb looking dangerous and No8 Benedict Grant running riot, the home team led 15-5 at the break.

Things picked up markedly for North Otago when Emery showed nice balance to score in the corner and replacement Alipate Tuipolotu made it 17-15.

But Horowhenua-Kapiti showed greater patience as the second half continued, and scored 10 quick points in the final quarter to seal the win.

The Old Golds will have to get back on their feet quickly as they face unbeaten Mid Canterbury in Ashburton this weekend.

Mid Canterbury ground out a 24-17 win over Whanganui at home on Saturday.

South Canterbury continued its strong start with a 61-17 thumping of Wairarapa-Bush in Timaru, Thames Valley made it two from two with a 35-19 win over East Coast in Ruatoria, Poverty Bay smashed Buller 76-14 in Gisborne, and West Coast beat King Country 34-17 in Taupo.