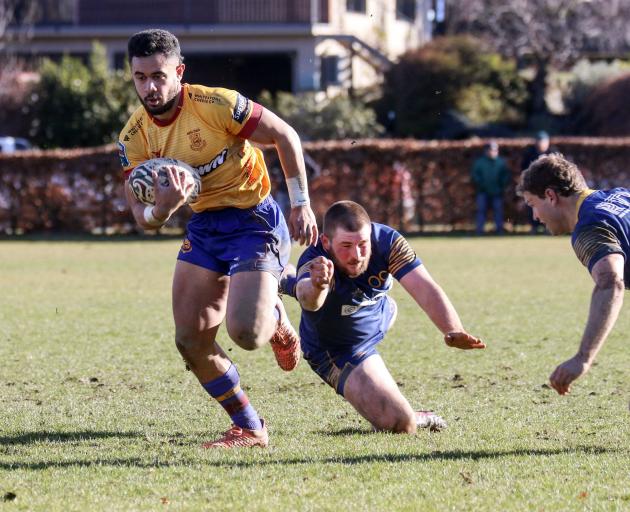 Abel Magalogo. Photo: ODT files
Here we (finally) go. The Heartland Championship begins this weekend, and North Otago will be eager to get up to speed quickly and defend the Meads Cup. Sports editor Hayden Meikle identifies five keys for the Old Golds.

Yeah, yeah. A very boring suggestion for a sports team that is up there with "the all-important first try" or the myth that is "momentum" in sport. But in the Heartland Championship, it’s actually true. You get a measly eight games, and if you stumble early, you can find yourself relegated to the Lochore Cup or (gasp) missing out on the playoffs altogether. That is an unthinkably horrifying prospect for North Otago, which has appeared in a playoff game every single year since 2000 — that is the longest active streak in New Zealand rugby. (You can’t count 2020, as Covid canned the competition.)

Selecting a team at the lower level of New Zealand provincial rugby is a bit of a crapshoot. Turnover is invariably high, and you never really know how your eclectic mix of locals and loan players is going to gel. Remember the team only gets a handful of trainings together before the first game. You constantly see Heartland sides talked up on paper but fizzling out. Likewise, you have some fools doubting a team’s prospects — as many, or at least one, did two years ago when the Old Golds came from nowhere to charge to Meads Cup glory. The best North Otago teams in the modern era find that right mix between workhorses and superstars, and get a collection of men with different backgrounds to play as one.

There are plenty of newcomers to look out for in the North Otago team — notably blockbusting centre Hayden Todd and lock Ben Morris — but most eyes will be on Abel Magalogo. The young utility back from Kelston Boys’ High School has loads of talent. Just get him the ball.

If all else fails, just make sure you smash South Canterbury. All other disappointments will be forgiven if you do.

By rights, North Otago should not have achieved so much success in recent years. It is a tiny union, and does not have half the resources of some others. Consider the fact the Old Golds have won three Meads Cups, and South Canterbury none. Crazy. But being small does not mean you have to have small ambitions. North Otago expects success, and sets its standards very high. Long may that continue. The Old Golds should start the season with the absolute intention of playing in the Meads Cup final.