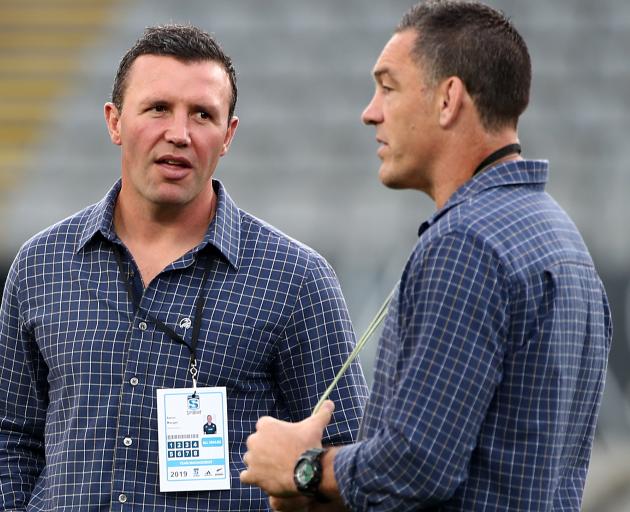 Former Highlanders coaches Aaron Mauger (left) and Mark Hammett. Photo: Getty Images
The two coaches who left the Highlanders last year have both ended up in the education sector.

Highlanders coach Aaron Mauger was in charge of the side for three years while Mark Hammett was the forwards coach for 2017-20.

Hammett (48) now finds himself in a new role as director of high performance and wellbeing at St Thomas of Canterbury College, in Christchurch.

Mauger (40) has stayed in Dunedin and is working at John McGlashan College.

He is working in mentoring and personal development along with leadership. He has also been enlisted to coach the school’s first XV.

Mauger also has a small role at the Kaikorai club.

Both Mauger and Hammett had coached extensively around the world and in NZ.

Mauger was involved in the Crusaders set-up and then went overseas to coach the Leicester Tigers.

He moved to the Highlanders in 2018 to become the head coach after the departure of Tony Brown to Japan.

He was first named assistant coach, but a few months later during the off-season he moved to the head coach role.

Hammett told The Star in Christchurch earlier this week, when he was finishing playing he was intent on teaching as a career option.

But rugby coaching instead became the path he went down for the next decade and more. Hammett coached at the Crusaders, Hurricanes, Cardiff Blues and in Japan before having four years at the Highlanders.