Full steam ahead into semifinals for Clutha

The four semifinalists have been found after an exciting weekend in the Southern Region competition.

The Clutha Steamers finished on top of the log with a come-from-behind 29-25 victory over Heriot at Balclutha.

The first half of the match was dominated in part by the visitors, although Clutha opened the scoring through winger Robin Fesilafai to set the tone.

Heriot found its feet and controlled the ruck, its forwards finding room up the middle.

Clutha made the most of its limited chances and shot out to a 14-3 lead before Heriot finally made Clutha pay for their soft defence and ill-discipline.

Heriot scored two tries late in the first half to lead 17-14 at halftime.

A try to Heriot and a penalty each opened the second half before Clutha scored an important try through No8 Max Pennell to make the score 25-24 to Heriot. 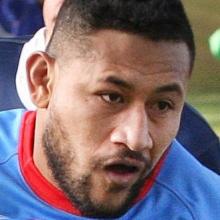 Robin Fesilafai.
Fesilafai scored the match-winner close to fulltime, giving Clutha the win, the Speight's Jug and the Springbok Horns.

It was not a vintage Clutha performance by any means, but the side got the job done.

Heriot can be proud of its efforts but ran out of steam towards the end of the match.

Crescent will take confidence into the semifinals next weekend with a 60-12 beating of Clinton at Clinton.

The first half was a fantastic tussle, the home side really taking it to the opposition up front.

Clinton muscled up and set a strong platform for their backs to attack. Key mistakes and concrete Crescent defence was the only thing that kept Clinton at bay.

Crescent made the most of its limited first-half opportunities and went into halftime 20-12 ahead.

Its players stretched their wings in the second half and showed their championship credentials. Six second-half tries, including a hat-trick to midfielder Ethan Edwards blew the score out and Crescent took the deserved points from the match.

Toko fought its way into the semifinals for the first time in seven years after a late Josh Beer-Williams try earned a 22-17 win over Owaka at Swamp Hen Park.

Owaka opened the scoring through flanker Joel White before Toko hit back with two tries to head into the break 10-7 ahead.

The second half was as physical as the first.

Owaka held a slim 17-15 lead with less than 10 minutes to go and had to defend with 14 men. They showed plenty of ticker defending for so long, but the defensive wall crumbled as Beer-Williams scored the match-winning try,

West Taieri beat Lawrence 25-10 at Outram after leading 11-0 at halftime.

Lawrence played well in patches but will need to improve when the two teams meet again next week in a bottom four semifinal.