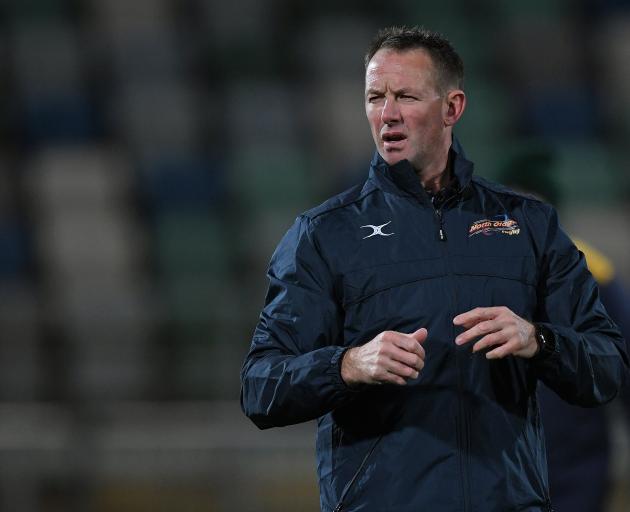 North Otago coach Jason Forrest eagerly awaits the first Heartland Championship game in nearly two years. PHOTO: GETTY IMAGES
Jason Forrest has been around a while but he is ready to launch into the great unknown.

The North Otago coach will not really know how his team is going to go in the Covid-delayed Heartland Championship until it has a couple of games under its belt, starting with the opener against East Coast today.

It will be the first Heartland game for the Old Golds since their memorable 33-19 win over Whanganui in the Meads Cup final on October 26, 2019.

They got a handful of ‘‘friendly’’ games against their neighbours in lieu of the cancelled competition last year, but otherwise it has been a lean diet of competitive action as a squad.

‘‘It’s a big unknown, and we’re all diving into it,’’ Forrest said yesterday.

‘‘Outside of South Canterbury and Mid Canterbury, who we were able to play against last year, we don’t know too much about anyone.

‘‘But it’s a level playing field, and we’re looking forward to diving in and seeing what happens.’’

North Otago has had a reasonable, although obviously scattered, build-up, with a win over touring King Country on June 5, a predictably rough loss to Hawke’s Bay in the Ranfurly Shield challenge on June 30 and a win over Otago Country on August 16.

Forrest expects his team, like the other 11, will have to shake off some rust today.

‘‘We’ve had a good week training, but when the heat comes on during a game, that’s when you see how people respond to it.

‘‘Hopefully the boys can stay composed and go about our business.

‘‘You just can’t afford not to start well. This is a competition where if you lose a couple of games, you might have no hope of making the top four.

‘‘Everyone’s in the same boat but I think bonus points could be massive this year, so we want to keep that attacking mindset and make sure we get as many four-try bonus points as possible.’’

Forrest and his crew struck magic dust in 2019, charging to the union’s third Meads Cup title with a marvellous blend of workhorse forwards and talented backs.

Turnover at Heartland level is often high, and only a single member of the XV that started that final — prop Melikisua Kolinisau — is in the Old Golds squad today.

While the forward pack still contains players who have experience, like captain Sam Sturgess and flanker Manulua Taiti, along with Dunedin-based locks Ben Morris and Aron Einarsson, the backs are green as grass.

‘‘It’s about getting to know some of these new players and what they can offer,’’ Forrest said.

‘‘Then we just work on getting the very best out of them. It’s a whole new group, but there is talent, and hopefully we will get there.’’

Jake Matthews and Abel Fagalogo form a young and potentially exciting inside back combination, while Levi Emery will look for some space to unleash his attacking skills.

North Otago has won the past five clashes with East Coast.

A familiar face in the visiting side is ageless Green Island prop Peter Mirrielees, appearing as a loan player.

The Heartland Championship will still feature eight weeks of round robin games, but will finish in mid-November, three weeks later than originally scheduled.

Instead of the top four teams progressing to the Meads Cup and the next four to the Lochore Cup, there will be straight finals — 1 v 2 for the Meads, 3 v 4 for the Lochore.