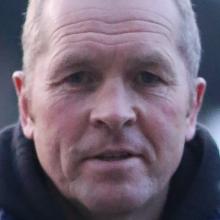 Barry Stevens.
North Otago will be out to add to its proud record in Heartland rugby when it meets King Country in Te Kuiti in the Lochore Cup final this afternoon.

Over the two decades that semifinals and finals have been played, North Otago has missed the semifinals on only one occasion, 1998, and qualified for finals on 11 of those occasions.

It has been successful in the finals on four occasions, winning the Meads Cup and the Lochore Cup twice each.North Otago co-coaches, Barry Stevens and Nigel Walsh have retained the starting XV which defeated Mid Canterbury last weekend. The  only possible change will be  Sione Misiloi coming back on to the bench if he passes  a  fitness test.North Otago’s form against Mid Canterbury showed that the side was  peaking at the right time, according to Stevens.

"We watched a video of the Mid Canterbury game on Tuesday night, so it’s just a matter of taking that attitude into today’s game. There’s not a great deal of difference among the Heartland teams, it just comes down to the top two inches," Stevens said.

"We’ve learnt going forward that you can’t have ups and downs in your form. It’s just something that individual players have got to learn. Things like preparation before games and a lot of this comes down to confidence. We’ve got a lot of young guys in the side, a lot of them quiet guys. They’ve just got to step up, communicate and talk a lot more."

"My gut feeling was that the conditions in our 4-4 drawn game suited them more than us but we came away from that game with renewed confidence after our forward pack matched their big pack.

"Nigel [Walsh] the forward coach has been been doing a lot of work on our set pieces and that created a couple of tries against Mid Canterbury. A good scrum and lineout enable us to get our attack going.

"I know it’s a final but it’s all about enjoying it and not putting too much pressure on ourselves. We can’t go out there defending the title because we haven’t got it. We’ve got to go out there this afternoon and win it and that will be our attitude."

King Country, current holder of the Lochore Cup after defeating North Otago in the 2015 final, 47-34, has had a strong season winning four games against Wairarapa-Bush, Poverty Bay, Horowhenua-Kapiti and East Coast, losing to Wanganui and Buller and drawing with Thames Valley and North Otago. King Country qualified sixth and in the semifinals beat Poverty Bay, 48-26.

King Country has made three changes to the side which drew with North Otago in the qualifying rounds. Blindside flanker Anthony Wise moves to lock alongside  captain Aarin Dunster, while  openside flanker Sam Mason will start in the six jersey with Daniel Baxter on the openside. In the backs, Alex Thrupp will start on the right wing in place of Ralulu Bavou, who goes into the reserves.

The Meads Cup final between unbeaten Wanganui and Buller will follow the Lochore Cup final.

Both games are live on Sky Sport.