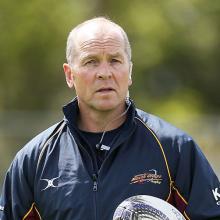 Barry Stevens. Photo: Getty Images
An Australian loose forward and an Otago cricketer are two of the intriguing newcomers in the North Otago squad for the Heartland Championship campaign.

Old Golds coach Barry Stevens confirmed his 28-man squad yesterday before the opening game of the season against Mid Canterbury in Ashburton on Saturday.

There is a reasonably high player turnover - just seven men remain from the 15 who started the Lochore Cup final less than a year ago.

The unexpected addition is Lucas Goodin, an Australian who has been playing club rugby at No8 in Hawkes Bay and can also cover lock.

``We don't know all the ins and outs but the feedback we get is that he's a strong ball-carrying player who is quite aggressive,'' Stevens said.

``At the moment, we don't have any real dynamic, aggressive ball carriers outside of Sione Misiloi, so this gives us a wee bit more grunt in our forward pack plus a bit more height in our lineout.''

A popular selection is that of midfielder-fullback-winger Craig Smith, who joins brother Robbie in the backline.

Craig Smith is better known for his cricketing exploits, having played 24 first-class games for the Otago Volts, but his rugby ability and versatility was on display for Maheno in its charge to Citizens Shield glory, and Stevens knows what he can offer.

``I actually coached Craig many years ago when he was in the Otago under-18s.

``He's one of those guys that is just a talented sportsman. His experience and general skillset is going to be important for us.''

North Otago is well served at halfback, where Robbie Smith will start but be challenged by Inoke Naufahu and Tyron Davies. There is plenty of depth and talent in the loose forwards, and there is a fresh look about the midfield and outside backs, where rookie Simon Lilicama could emerge.

The glaring issue is at lock. North Otago does not have a single specialist lock in the squad, and will be relying on a variety of tallish loose forwards and Sale Pi'i, who spent most of the club season on the wing.

Stevens was struck a major blow on the cusp of the Heartland Championship when English lock Kennet O'Neill, who went on the Old Golds' tour of Canada, opted to return to England for family reasons.

Marcus Balchin is rewarded for his club form on the openside flank for Maheno, but his selection spells bad news for Mat Duff.