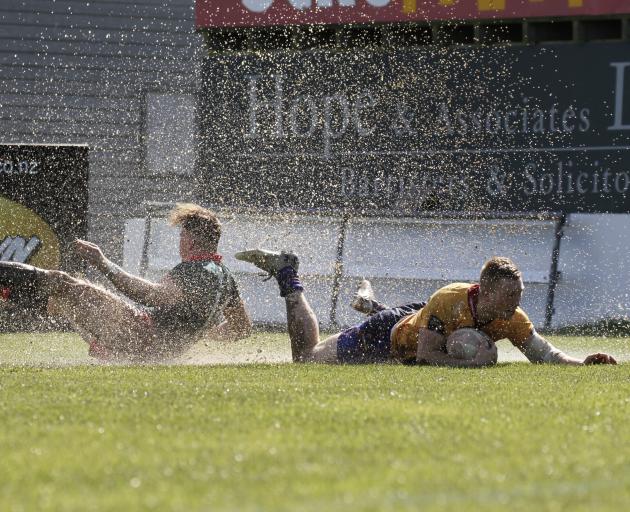 North Otago winger Howard Packman splashes in for one of his two tries against Wairarapa-Bush in Oamaru on Saturday, with his opposite, Logan Hebenton-Prendville, too late to stop him. PHOTO: PHIL JANSSEN
North Otago will host Whanganui this Saturday after a couple of pulsating Meads Cup semifinals on Saturday.

The final is set for 3.05pm this Saturday.

North Otago was a quality side in its semifinal and withstood a fightback from the opposition.

It held an edge in the first quarter, leading Wairarapa-Bush 7-3 after hooker Hayden Tisdall finished off a 30m break from halfback Robbie Smith.

Midway through the half, North Otago fullback Patrick Pati took a tap penalty and opened up the defence which led to burly prop Meli Kolinisau barging over.

Smith's conversion took the Old Golds out to a 14-3 lead but 11 minutes from halftime Wairarapa-Bush half Daryl Pickering sparked an attack to score and Priest's conversion reduced the home side's halftime lead to 14-10.

North Otago's coach Jason Forrest felt better rugby was to come in the second half.

"I felt the boys probably put too much pressure on themselves playing on the home ground in front of a big crowd of supporters. Sure, we put a stamp on the game with some strong scrummaging and I felt we really dominated. That sphere was outstanding," he said.

Priest reduced the gap to a solitary point four minutes into the second half but three minutes later North Otago scored the try of the match.

Priest kicked deep into North Otago territory. In the resulting scrum, North Otago took a tighthead and cleared to halfway, where No8 Josh Clark won the lineout.

North Otago fullback Patrick Pati found space on the blindside and he sent left winger Howard Packman flying into the scoreboard corner for an unconverted try, extending the lead to 19-13.

Midway through the second half, a Smith penalty took North Otago to a 22-13 lead and the pressure began to show on Wairarapa-Bush.

Midway through the half, Packman's pace enabled him to score a second try which took the home team out to a 27-13 lead.

Wairarapa Bush threw everything at North Otago in the final 10 minutes. From a lineout drive 5m out from the North Otago line, Sam Tufuga was driven over to reduce the margin to nine points.

A couple of minutes from fulltime, Wairarapa-Bush replacement back Brock Price went in for a try which Tipene Haira converted, reducing North Otago to a narrow 27-25 lead, which it retained for the remaining two minutes of the game.

The final of the Lochore Cup will be played next weekend in Greymouth. West Coast beat Poverty Bay 41-35 in Greymouth while South Canterbury caused a minor upset with a 56-24 drubbing of Buller in Westport.