Rain could be the challenge for unbeaten North Otago 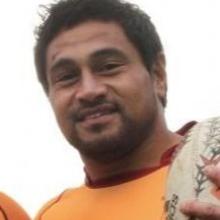 Lemi Masoe will be out of the starting line up for North Otago. PHOTO: HAMISH MACLEAN
North Otago will be out to make it four wins in a row tomorrow.

It meets Poverty Bay in the Heartland Championship in Gisborne, after defeating Otago Country, South Canterbury and Wairarapa-Bush.

However, it may be the climatic elements that it will have to overcome. The forecast for Gisborne is rain, an element that North Otago has seen little of in the club rugby season.

North Otago will be without its two most experienced players. Centurions prop Ralph Darling and midfielder Lemi Masoe are missing from the starting team. Kelepi Funaki starts on the loosehead side of the scrum, while Meli Kolinisau returns from New Zealand Heartland XV duty to the tighthead.

Masoe's absence will be filled by Clement Gasca.

Relatively young, Cairns had to give up playing rugby because of a bad back injury.

"I'm a teacher by trade so my coaching philosophy is really about the establishment of positive relationships and coaching helps me to do this," he said.

"Early in the season we played Thames Valley and 21 of the 23 players were players who had been coached by me at some time. We try to use only local players plus three players of origin.

"The main aim is to strengthen rugby in your region."

Poverty Bay has had a win and a loss so far. It had a 17-15 win over Thames Valley and last week lost to South Canterbury 40-29, but had a strong second half.

The Heartland competition is an even one. After two rounds, only West Coast and North Otago are unbeaten, while Whanganui, usually a strong contender, has lost its first two games.