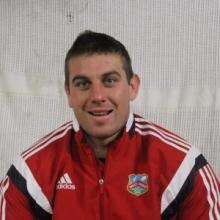 Brad Houston
Players and officials scrambled to save the life of a West Coast rugby player who suffered a heart attack on the field.

Brad Houston was walking to a lineout during his team's against Thames Valley at Te Aroha yesterday, when he stopped and sat down, complaining of not feeling very well.

Next thing, he was out, Thames Valley coach Matthew Bartleet said.

"There had just been some play and the bloke just sort of as making his way to the lineout, which would have been the next play, and he sat down. He said he felt unwell, or something along those lines, and next thing he just flaked out."

Houston is one of the club's longest-serving players, clocking up 68 games, the second biggest achievement next to utility back Maleli Mudu who has played 99 matches.

However, it's not the first time he's suffered a suspected heart attack while on the field.

He collapsed to the ground after scoring a try in a game of rugby league two years ago.

"He's presently in hospital in Hamilton. As far as I know to this point, he's doing alright.

"Naturally he's in the hands of the medical people and they will make the decision around what needs to be done, and whether anything will be done at this point.

"So basically, that's the situation at the moment."

As for what happened, Connors said Houston "had an issue" and that it was now a private matter for him and his family.

However, he was proud of the team for coming from behind and winning the match against the hosts 27-25.

The loss of Houston in their team would be huge, he said.

A Waikato Hospital spokeswoman confirmed Houston was stable in a ward. The family did not want to comment, she said.

As for Bartleet, he said he's proud of the actions of the team's physio for springing into action so quickly, together with the physio from the West Coast team.

"The [St John] ambulance was there but Joe Van Doorn our physio he leapt into action, he was really good. He's just done a course on it, so that was timely, a first aid and defib course, so good on him.

"He's player of the day, definitely. You save someone's life, we shout him beers."

One of the managers also put up a privacy shield so staff could work on Houston without the gaze of the crowd.

He said it was common for a defibrillator to be available at each of the Heartland matches, he said New Zealand Rugby had been pushing for each club to have one.

However, that came with a cost that some were yet to afford.

It was the first time the club had used it, he said.

As for the loss, Bartleet said it was disappointing but that's the game of rugby.

"No, it was disappointing. They did well, they clawed their way back into it so good on them."