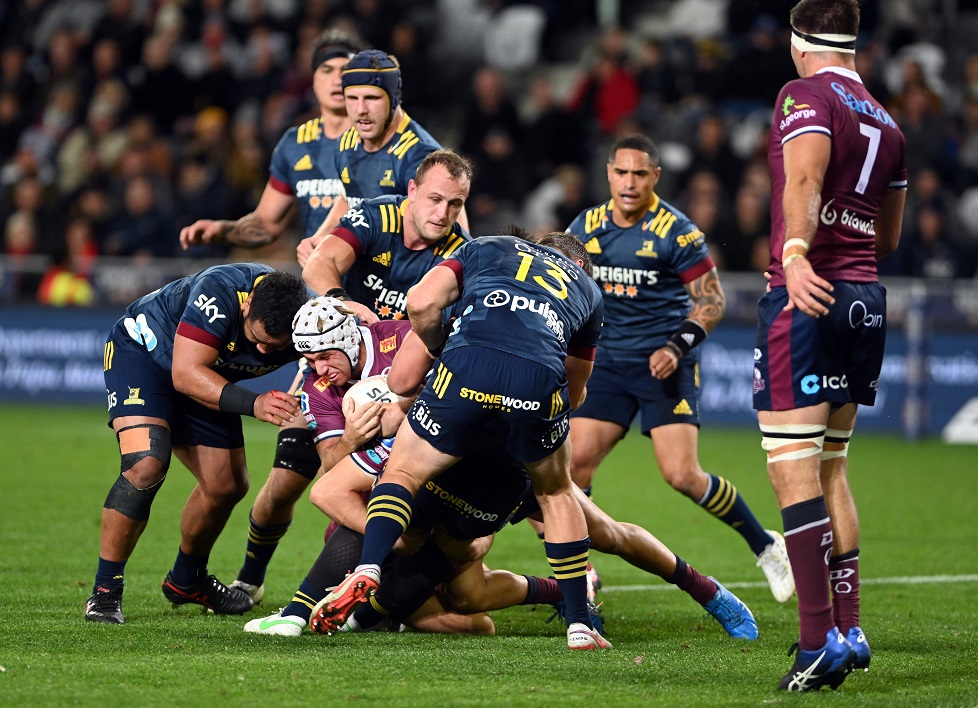 Reds midfielder Hamish Stewart is swamped by Highlanders players. Photo: Linda Robertson
The Highlanders have carded a big 40-19 win over the Reds in their Super Rugby Trans-Tasman encounter in Dunedin tonight.

It was not as emphatic as the score suggests, but the Highlanders will be satisfied nevertheless to take the scalp of the Australian champions in the opening game of the competition.

They earned the win. That much is undeniable. They controlled large parts of the game and spent much of it, maybe even most of it, inside the Reds' territory.

They had the edge in the physical stakes, too and in a second half that saw both sides unravel a touch, the Highlanders held themselves together marginally better.

It helped that the visitors looked like a team struggling to put the epic final of last week behind them and didn't have much zip or dynamism about either their attack or defence.

It helped more, however, that the Highlanders had enough focus and clarity to convert their extended periods of pressure into tries. It was tidy and efficient from the Highlanders rather than ruthless and relentless – but importantly, they played well enough to get the result they wanted.

There's no doubt, either, that Aaron Smith was the beating heart of the Highlanders. His aerobic capacity seems to almost crazily have got even greater from a considerably high base and he seemingly managed to be at every breakdown.

And his value once he was there was impossible to deny. He was simply brilliant at picking which runner to hit and if threw passes with a priceless accuracy that allowed receivers to take the ball at speed and with the ability to make the next pass with no fuss.

Just how good he is was best seen in the build-up to the Highlanders' third try when he made a brilliantly inviting pass that drew Mitch Hunt on to the ball to commit the Reds defence.

A few phases later he then managed to throw a huge pass, directly from the floor, off his weaker left hand that landed right in Sio Tomkinson's hands and allowed him to canter over the line untouched.

Certainly Smith was a differentiating factor between the two sides, but the greater truth is that the contest was won by the cohesion and energy of the Highlanders pack.

The Highlanders didn't obviously dominate the areas they needed to, but they definitely played on the front foot. They scrummaged well enough to persuade Reds coach Brad Thorn that he needed to bring on Taniela Tupou after just 30 minutes.

It was their lineout, however, that was more effective, and the cleanliness of the ball Pari Pari Parkinson provided enabled the Highlanders to make punchy attacking movements that were enhanced by the speed of the recycling at the breakdown.

The outstanding defensive work of Hugh Renton was another contributing factor, and they were further enhanced by the smart kicking play employed where they regularly nudged the ball behind the Reds and forced them to scramble deep in their territory.

The accuracy and creativity of the Highlanders kicking game was in stark contrast to that of the Reds, who made the mistake of too regularly pumping the ball high and aimlessly, leaving the likes of Sam Gilbert and Jona Nareki to field it under limited pressure.

Nareki, in particular, caused problems with his kick-return work and the Reds spent the first 40 minutes pinned in their own territory, facing constant reminders that life against New Zealand teams is as uncomfortable as it has always been.

There was no easy way for the Reds to exit their own half and the pressure just constantly built on them – with the Highlanders managing to convert the bulk of their opportunities to keep the scoreboard ticking over, until they were able to cut loose in the last 10 minutes.