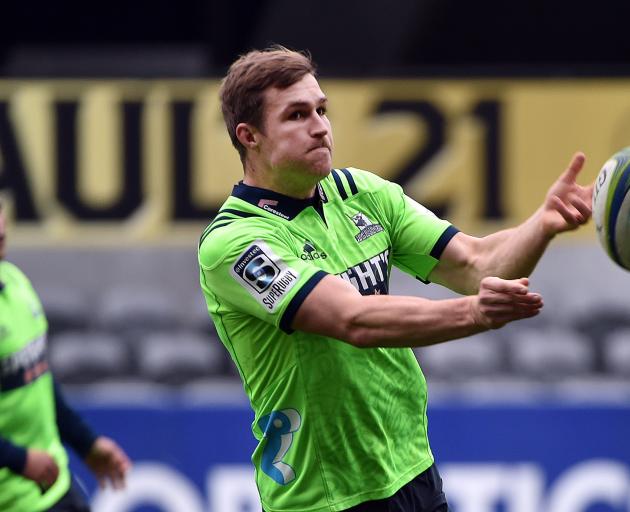 Highlanders centre Michael Collins goes through a passing drill at a Highlanders training at Forsyth Barr Stadium yesterday. PHOTO: PETER MCINTOSH
One match it is pass to him, the next it is tackle him.

The last time Michael Collins played and prepared in midfield he partnered Rieko Ioane. This time, back in midfield, he will be facing him.

Collins (27) put on a sharp 40 minutes against the Chiefs in the second half in Hamilton two weeks ago and it helped the Highlanders to a last-minute victory.

His reward is to start with the No13 jersey on his back in the match against the Blues at Forsyth Barr Stadium tomorrow afternoon.

The Otago captain, who does not have a Super Rugby contract for next year, said though he played in the midfield for the Highlanders earlier this year against the Brumbies, the last time he prepared the whole week to play centre was in 2018, when playing for the Blues.

He partnered up with Ioane to take on the Reds, Hurricanes and then the Crusaders.

It did not end well, with the two derby games ending in defeats.

"I think Ngani [Laumape] scored about four tries. I can blame Rikes [Ioane] for that, I think. So he [Ioane] will be out there to get a few quotas back this week," Collins said.

"It will be a good challenge against him. He is obviously a good quality, top player. But you want to back yourself against the top guys. I will try not to make his Instagram come Sunday afternoon. Obviously, we are pretty close off the field but it will be good to have a crack against him."

In the 2011 NZ Schools side he replaced Laumape at second five-eighth, and started his Otago career in the midfield.

It was injury which forced him to fullback, his first game at the back against Wellington in 2015.

"I think it was Gavin Stark got a hernia or something, and I got thrown in at the last minute."

Tony Ensor went to the wing, I went to fullback and it sort of all went from there. I had a couple of games there and then went over to Wales.

"I was really lucky there [in Wales] as I had a couple of specific coaches there who knew all about positional play. That was where it changed. Happy to give centre a go this week ... think centre may suit me with the way the game is played these days."

He said the two positions do not offer much difference.

"I think it sort of moulds into one, to be fair. Once the structure goes you just need to control everything and where you are in the field. Over the whole game it is pretty much similar."

Highlanders coach Aaron Mauger praised his communication and composure in the performance against the Chiefs.

Collins said the side just went back to the way it wanted to play and it paid dividends.

"That last half against the Chiefs, it sort of worked for us. Once we were chasing the game we almost had to throw the ball around and went back to the default way we want to play."

Having spent three years with the Blues he said there were no hard feelings about playing against his old team.

He said all teams were different but each had their benefits and disadvantages.

"I never got stuck in the Auckland traffic, as I lived 30 seconds away from training. Never walked, mind you, always took the car, but lucky enough to never get stuck."