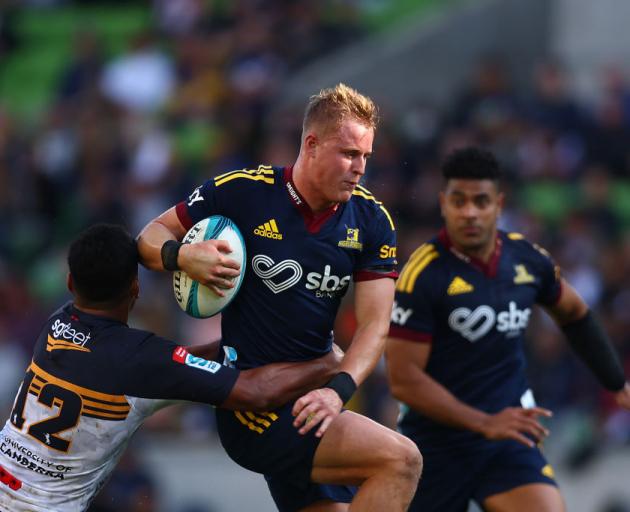 Sam Gilbert of the Highlanders is tackled during the round 10 Super Rugby Pacific match against the Brumbies. Photo: Getty Images
The Highlanders have sprung a massive surprise and named outside back Sam Gilbert at first five for their critical game against the Force in Dunedin on Friday.

Coach Tony Brown has tinkered with the backline all season in an attempt to get the best out of his talent.

But the latest positional switch is more at the radical end of the spectrum.

Gilbert played his schoolboy rugby in the No 10 jersey and Brown is confident he has the skill set to make the move work.

“Sam has a good all round skill set, kicks well out of hand and off the tee, is a strong defender, communicates well and is an elusive runner,’’ Brown said.

‘‘Although he hasn’t played 10 at this level, we believe he has the aptitude to lead us around the field. Mitch plays well off the bench, so we believe it will be a good combination.”

The other changes in the backline sees Josh Timu named at centre. The impressive Thomas Umaga-Jensen shuffles in a spot to second five and midfielder Fetuli Paea moves to the right wing.

The starting forwards have a familiar look. The only change is at hooker where Andrew Makalio replaces the injured Liam Coltman.

Young lock Fabian Holland is named on the bench and winger Liam Coombes-Fabling returns from injury.

Lienert-Brown began his Super Rugby career in 2014 at the Crusaders, playing two games, before linking with the Highlanders in 2015 and has been a regular in the side ever since. A strong and mobile prop who is enjoying good form this season.

Also bringing up a milestone is Bryn Evans playing his 50th game of Super Rugby having played the first of his 25 games for the Hurricanes in 2009. He returned from a decade in the United Kingdom in 2021 to play for the Highlanders. Following last week's win against the Reds in Brisbane, the Highlanders are now inside the top eight and eager to maintain a playoff spot heading into the final three rounds.

Brown is aware of the importance of the next few rounds:

“At least our destiny is in our own hands now and if we can keep winning - we make the playoffs, which of course is easier said than done. We must continue to grow as a team and improve each week if we are to be contenders in this competition. There are a number of teams playing good rugby at the moment and we know we haven’t put a complete performance out on the park yet.” 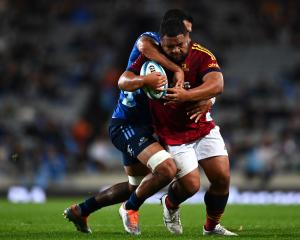