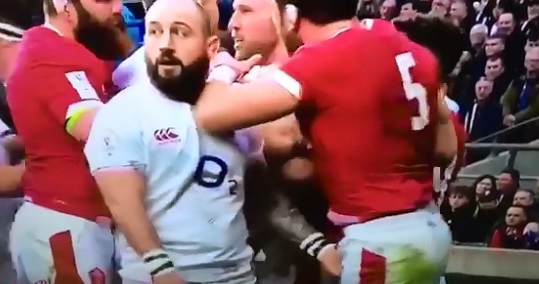 Photo: Twitter
England prop Joe Marler has been banned for 10 weeks for grabbing the groin of Wales captain Alun Wyn Jones during their Six Nations match at Twickenham at the weekend.

Teammate Manu Tuilagi, who was shown a red card late in the match for a dangerous tackle, will have to serve a four-week suspension.

England, who beat Wales 33-30, are level at the top of the Six Nations table with France, but their final game against Italy in Rome has been postponed due to the coronavirus outbreak.

An independent disciplinary committee heard submissions from Marler at a meeting in Dublin and found he had committed foul play that warranted a red card.

The committee reduced a potential 12-week sanction by three weeks to take account of mitigating factors but then added a week because of Marler's most recent disciplinary record.

"Marler is therefore suspended for 10 weeks and, given his playing schedule, is free to resume playing on Monday, 8 June 2020," the RFU said in a statement.

A citing complaint against England flanker Courtney Lawes, who was accused of a dangerous tackle on Jones, was not upheld because it had not warranted a red card.