Folau's costs mounting by the day 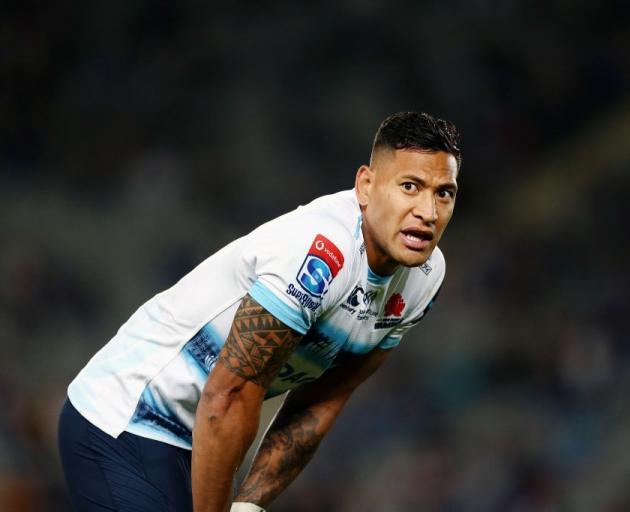 The footwear giant said they could no longer sponsor Folau because their values "no longer align".

"ASICS is dedicated to sport and its healthy contribution to society. We believe sport is for everyone and we champion inclusivity and diversity," the company said in a statement.

Folau's future in Australian rugby is looking increasingly grim after an independent panel retired to consider a sanction following an intense three-day code of contract hearing in Sydney. It found he had committed a "high level" breach of his contract for controversial social media posts.

Former Wallabies coach Alan Jones yesterday claimed Folau was "at peace" as he weighed up the potentially crippling cost of his bitter legal battle with Rugby Australia.

Should the panel choose the most severe level of punishment in their power and terminate his four-year, $A4 million ($NZ4.25  million) contract, it's expected the dual international will appeal.

But with insiders estimating Folau would have already outlaid in excess of $A100,000 on legal representation for his landmark code of conduct hearing, the three-time John Eales Medallist may at some point ask himself if it is all worth it.

It's been suggested Folau would be spending $A25,000 a week on solicitor fees, even before stepping inside a hearing room.

Should Folau be sacked, then lose an appeal and take the matter to court, the financial cost could be astronomical.

The best the 73-Test veteran can hope for is leniency from the panel and a suspension and/or fine.

Regardless of the sanction, which is not expected to be handed down for several days, Folau is said to be handling the threat of termination with dignity.

"I've just had a note form Israel, he won't mind if I'm sharing it with you because I said to him, 'Hold your head up'," former Wallabies coach Alan Jones said on 2GB radio on Wednesday.

Having pursued termination since Folau sparked a firestorm with his latest posts, a year after being warned for similar offences, Rugby Australia will argue they have no option but to proceed with his sacking given his vilification of the gay community - among other alleged "sinners" - and the damage he has caused the game.

Had the panel deemed Folau's breach of Rugby Australia's players' code of conduct anything less than "high level", the governing body would not have had the power to boot the devout Christian out of the game.

Jones, for one, is urging Folau to "take this fight every inch of the way" after sitting down with the fallen star last week.

"We sat down the other day and had a long yarn. In many ways it was very, very sad," Jones said.

"We were having a feed ... and at one point he just threw his hands gently up in the air and he said: 'Alan, I don't know what this is about. What am I supposed to have done here'?'

"It will go to the highest court in the land if it has to ... the battle has just begun."