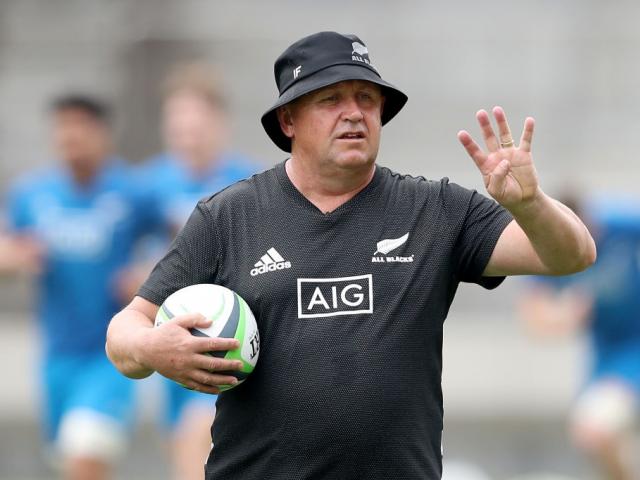 Ian Foster. Photo: Getty Images
All Blacks coach Ian Foster has reinforced the need for his side to start the World Cup in the right away against South Africa on Saturday, saying a good performance would put down a marker for them.

What was left unsaid was the fact it will also show the other contenders what they are up against and an excellent performance from the defending champions would be a significant mental blow.

He also poured cold water on what appears to be a provocative attempt from the South African camp to create a little intrigue over the injury status of lock Brodie Retallick, who is recovering from a dislocated shoulder suffered in the draw between the two teams in Wellington in July.

Springboks assistant coach Matthew Proudfoot flew a metaphorical kite today when he said he wouldn't be surprised if Retallick played against his side in Yokohama despite the All Blacks repeatedly saying the key forward wouldn't be available until the final pool game against Italy at the earliest.

"I do not know why Matthew would think that," Foster said.

"I really don't know. He [Retallick] is quite hard to hide from you guys – he's a six foot nine monster, so we haven't been sneaking him into training or anything like that. He is progressing really, really nicely. I'm pretty sure he won't be there on Saturday but who knows?"

Told that another Boks assistant coach, Mzwandile Stick, thought out loud recently that referees might be more consistent in their officiating of the All Blacks now that they were no longer World Rugby's No1-ranked team, and that it may have been another opposition tactic to "poke the bear", Foster replied: "Oh, it sounds like it. I honestly don't know. All I know is that they're good men and they must have enjoyed their press conference."

Foster was reluctant to make any more of it – probably because of the excellent relationship between the All Blacks and Boks and the fact he doesn't want to provide any extra ammunition in terms of motivation. The latter will likely be a common theme throughout the next couple of months here.

"Deep respect, I reckon," he replied when asked to describe the relationship.

"We're at a heightened state always when we play South Africa. I know it's a World Cup and the World Cup is big, but our focus has been on this game for a long time.

"That second Bledisloe was a massive game for us because we were under a lot of pressure then and deservedly so… since then we've had a bit of a break and a clear mindset on this tournament and the importance of game one.

"Can I just say that it's important in game one to get your performance right. We want to kick this tournament off to a level where we put a marker down and say that's where we are at – for our own information more than anything - so that we can grow. We know we'll have to get better and improve because everyone else will analyse you and so what you're doing. We'll deliver up our game and assess it and look at it. We'd love to do that off a good result."

He also had no interest in revealing his preferred quarter-final opposition. It will probably be either Ireland or Scotland, assuming the All Blacks finish first or second in their pool.

"No, as you guys all know we've probably got our own problems on Saturday. We've been saying all along; we're actually not thinking too far ahead in this tournament because Saturday is a pretty big weekend. It's made it really good for us as coaches because we can just put all our energy into that first game."