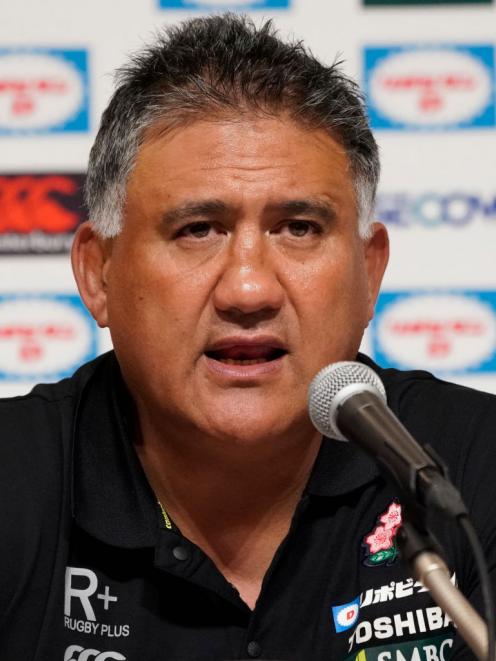 Japan coach Jamie Joseph. Photo: Getty
Their test against South Africa is a "must-perform" match for Japan, coach Jamie Joseph said after naming a strong squad for the contest as the Brave Blossoms finalise preparations for the Rugby World Cup on home soil beginning later this month.

Friday’s (local time) match in Kumagaya is both team’s final test before the World Cup starts on Sept. 20 and both Joseph and his South African counterpart Rassie Erasmus have named strong teams .

After winning all three matches in the competition to clinch the Pacific Nations Cup last month, Joseph’s men are coming into the contest full of confidence but know that the Springboks, recent winners of the Rugby Championship, pose a different threat.

"South Africa is a must-perform game; we need to perform, play our type of rugby and take our challenge to them. I don’t know where you get 'it’s a must win game' from."

"It is the last game of our preparation, gives our players a real physical experience at the set-piece, at the tackle, in the lineout and in the maul."

"But it is a game in which we must perform and continue our preparation as we head to the World Cup."

Japan will be without key forwards Shota Horie and Kazuki Himeno, who are battling niggling injuries, but Joseph believes he has selected a team that can challenge the South Africans at the set-piece and breakdown.

"You have to think about the opposition we are coming up against in the World Cup and all the four teams have strong set-piece," said Joseph, whose team are drawn in Pool A alongside Russia, Samoa, Ireland and Scotland.

"Russia have a very strong pack, a very strong lineout. Samoa is a very strong scrum, Ireland and Scotland will target us in those areas so they (South Africa) play similar rugby to what we are expecting."

With a physical battle expected, Uwe Helu starts at lock alongside Luke Thompson, a veteran of Japan’s famous victory over South Africa four years ago, with captain Michael Leitch joined in the back row by Pieter Labuschagne and Amanaki Mafi.

Joseph may hand a debut to prop Takuya Kitade, who has been named on the bench for the first time.

"Kitade has been selected by Japan for the first time so he gets an opportunity to play in a game that has immense pressure, especially at the set-piece and that is one of the reasons we selected him," said Joseph.

Leitch, who scored a try in Japan’s 34-32 win over South Africa at England 2015, said that the team have come along way in the past four years and are ready to take on the Springboks.

"Last time we played against South Africa, they were just so above us. This time as well as they have ability to win against the All Blacks, but it has become important to observe each player,” explained Leitch.

"If you see the analysis of players one by one, you start to see that there is weakness in each player."

"When it becomes a match of human against human, we are quick, we have power and then we can create confidence to play against South Africa."