Lions then eye to Super Rugby for Gatland 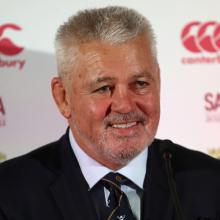 Gatland, confirmed overnight as the British and Irish Lions coach for the 2021 tour of South Africa, will quit as the Wales boss after this year's World Cup.

He told the BBC he has no interest in coaching England.

"My understanding is Eddie [Jones] is going to re-sign for a bit longer.

"I'll focus 100% on the Lions for those 12 months and then hopefully have an opportunity to go back to New Zealand and pick up something and then take it from there.

"I would love to be involved with Super Rugby and to challenge myself with that.

"I want to go back. I have been head coach with Waikato and won a championship there, and I want to challenge myself with Super Rugby."

Gatland has been coaching in the north for nearly three decades.

He initially appeared reluctant to continue his successful Lions reign claiming he was hurt by an "orchestrated campaign" of criticism by the New Zealand media in 2017.

"When I thought about what the Lions meant to me personally, it would have been hard to say no," he said.

"The approach came and I thought to lead three Lions tour and to try and go undefeated as a head coach in a test series, I couldn't walk away from that."