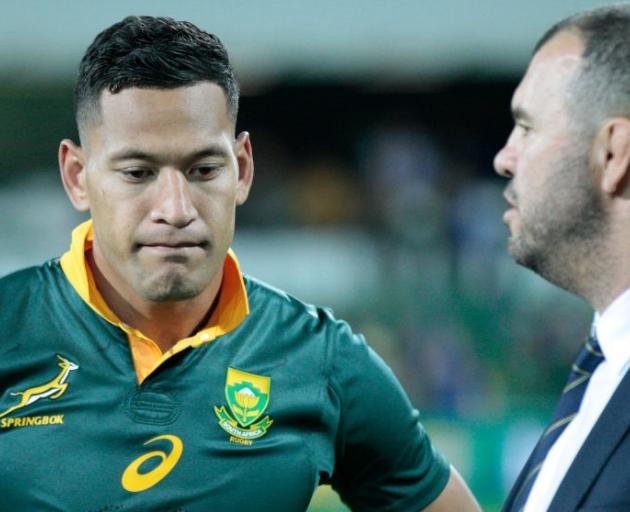 Folau has been stood down by New South Wales and Rugby Australia intends to terminate his contract.

A devout Christian, the 30-year-old had previously been warned, but not sanctioned, for similar comments.

Speaking to media today, Cheika stated that Folau would not be playing for the Wallabies - a major blow in a Rugby World Cup year.

Cheika said he had attempted to contact Folau several times since the player posted last week.

"No I haven't spoken to him," Cheika said.

"Based on what I've just said, we wouldn't be able to pick him.

"If I'm honest, my reaction was that we'd had that discussion and that line has been crossed," Cheika said when asked about his thoughts on the controversial posts.

The NRL said last week that Folau would not be welcome back to league.

Meanwhile, Folau says it will be "God's will" if his rugby career is over.

He told the Sydney Morning Herald yesterday  he would walk away from rugby and his multimillion-dollar income if God willed it.

"First and foremost, I live for God now," he told the paper. "Whatever He wants me to do, I believe His plans for me are better than whatever I can think.

"If that's not to continue on playing, so be it. In saying that, obviously I love playing footy and if it goes down that path I'll definitely miss it. But my faith in Jesus Christ is what comes first."

Folau said he had no intention of retracting or apologising for his comments about gay people which, he insisted were based on his Christian beliefs.

"I'll stand on what the Bible says," he said. "I share it with love. I can see the other side of the coin where people's reactions are the total opposite to how I'm sharing it."

Folau indicated he was unlikely to legally challenge his termination, though some legal experts believe he would have a strong case if he asserted his right to freely express his beliefs.