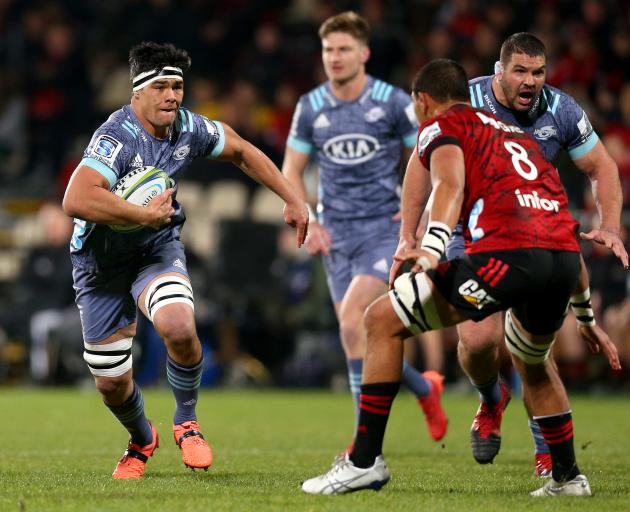 Reed Prinsep's (left) leadership responsibilities at the Hurricanes will aid his captaincy of Canterbury in the Mitre 10 Cup. Photo: Getty Images
Reed Prinsep won’t be lacking All Black-level leadership nous to lean on when he leads Canterbury for the first time in this season’s Mitre 10 Cup.

The Christchurch-born loose forward was unveiled as France-domiciled Luke Whitelock’s successor on Wednesday ahead of Canterbury’s campaign-opening trip to North Harbour on Friday night.

Prinsep was offered the role by co-coach Mark Brown, who chose the now 27-year-old to skipper Canterbury age group teams a decade ago, and has already tapped into the All Black centurion Sam Whitelock’s experience on and off the field.

“I said to him: ‘Look, obviously you’re just here to play, we’ve got the leadership group here but if you see anything make sure you come up and talk to me’,” Prinsep said.

Key All Blacks Codie Taylor and Richie Mo’unga, who plays his 50th game for Canterbury off the bench at Albany, are also among sounding boards for Prinsep while they are available for the domestic competition.

He said being a member of the Hurricanes leadership group was also beneficial.

“When Colesy (Dane Coles) or TJ (Perenara) went and I was on the field I’d go to captain. I also looked after the (Super Rugby) preseason games when they weren’t available,” he said.

While Coles and Perenara did not always enjoy harmonious relationships with referees, Prinsep said he would adopt a more measured perspective.

“I’m probably the calming head up there,” he admitted.

“I’ll say things when I need to say things but for me it’s all about leading by actions.”

Prinsep added it was exciting to have some of Canterbury’s All Black contingent available for the North Harbour clash.

“When Covid hit the possibility of that happening was pretty real so for now to it be a reality pretty special,” he said.

That realisation hit home in a huddle at training when halfback Mitchell Drummond asked Whitelock when he last played for Canterbury.

It was back in 2010 when new tighthead prop Fletcher Newell was a 10-year-old.

“Guys coming back with that experience to match up with young fellas is a pretty cool thing to be a part of,” Prinsep said.