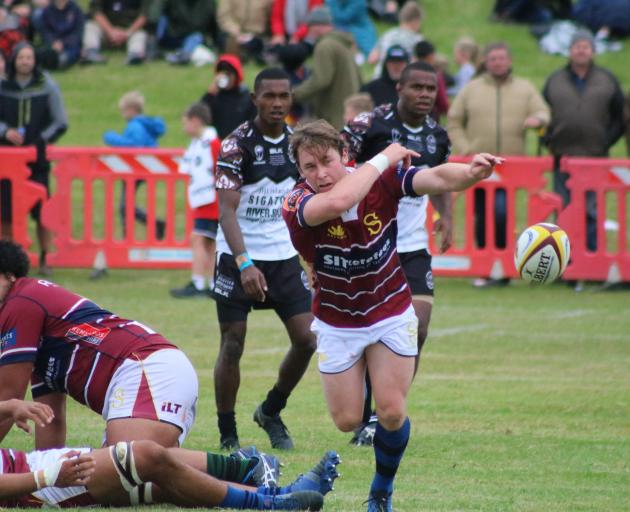 Southland halfback Jay Renton moves the ball on during Southland’s 43-31 win over the Nadroga Stallions at the Southern Field Days match at Fred Booth Park in Waimumu yesterday. PHOTO: KAYLA HODGE
The young ones started them off but it was the experience that got Southland over the line.

The side fielded different sides each half: up-and-comers in the first and a team stacked with Highlanders and Stags in the second.

Southland trailed 14-12 at halftime after No 8 Lio Tosi scored a try right on the break.

The second half was a different story. Southland fullback Josh Moorby scored the first of his two tries in the first five minutes and showed Southland's intent from early on.

Southland coach Dale MacLeod said there was some "rustiness" but there were promising signs in both halves.

"We had the younger inexperienced group that fought their way back into the game and came back in the second half," MacLeod said.

"That second-half team looked really good when they were doing the right things but there was just some execution of skill but that’s what you expect this time of year.

"I would have liked to have seen that second half group a bit more dominant but I thought territory-wise and what they did showed what they would’ve been if they’d actually held a couple of passes and just little execution."

Fullback Henry Earland and first-five eighth Ryan Taylor impressed in the first half and a trio of young ones in the second half followed suit.

"Arese Poliko at No8, we were only going to give him 20 minutes but he was outstanding I thought and Hayden Michaels who is still at school came on and he was pretty good.

"Aleki Saili at lock came on with 10 to go and he was at school last year too.

"I was really impressed with them and it’s good that we’ve got those young boys and still at school who have come up."

Nadroga played with the flair Fiji is known for.

Winger Tavimeleki Vesau made an easy break sprinting 80m down the field to score the opener under the posts.

Nadroga was awarded a penalty try in the second half after Southland centre Issac Te Tamaki tackled winger Vilimone Bainibure without the ball as he was about to score.

Vesau scored his second of the day with a beautiful own chip kick over Te Tamki before darting down the blindside.

The Southland players will now shift their focus to the club rugby season beginning at the end of next month.

"The good thing is all of the boys in this group have got an opportunity to play a game and put the Stags jersey on which is pretty special and now they go away and work hard to put the real one on.

"This has been a really good focus point for them and now they’ll hit their club season and we’re way ahead of where we were last year which is really pleasing."