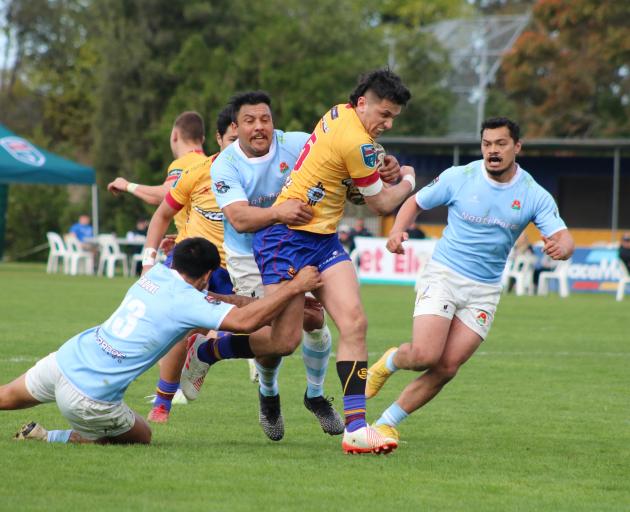 North Otago’s player of origin Levi Emery made several good breaks on debut on Saturday. PHOTO: KAYLA HODGE
North Otago has its first points on the board in its bid to successfully defend the Meads Cup.

After a delayed start to the Heartland season due to lockdown, North Otago finally took to the field on Saturday, beating Ngati Porou East Coast 39-31 at Oamaru’s Whitestone Contracting Stadium.

The win meant East Coast — coached by former All Black and Highlander Hosea Gear — was handed its 51st Heartland loss in a row.

However, North Otago was made to work for the win.

Both teams started shakily, but North Otago gave away a couple of penalties to let East Coast take a 3-0 lead.

The home side’s experienced forward pack produced a powerful scrum, forcing the ball out for flanker Toni Taufa to snaffle the ball and score the first try. However, East Coast fired straight back, scoring a try from a charge-down.

There were glimpses of the potentially exhilarating backline the Old Golds have this season. Winger Sione Fa’oso was hard to pin down, making a bolstering run, popping up a nice outside ball to halfback Jake Matthews to score his first of the day.

Five minutes later, Matthews was under the posts for another following offloads from second five-eighth Mataroa Maui and fullback Levi Emery which put him in space.

However, East Coast scored on the break to take a 24-17 half-time lead.

North Otago came out of the break fresh, and captain Sam Sturgess scored off the back of a textbook rolling maul from the lineout.

East Coast defended hard, stunting North Otago’s ability to get over the line more despite putting together multiple phases.

However, when East Coast knocked the ball on, the Old Golds grabbed their chance with Emery chipping to score and seal the win.

Abel Magalogo and Emery were impressive in their Heartland debuts, while Taufa had strong carries and prop Lisivani Tuifua injected energy off the bench.

Best on the field for East Coast was first five-eighth Terangihekeoeteau Fraser who scored a dazzling 60m try off a quick tap.

Both teams were guilty of silly handling errors, and will seek to improve.