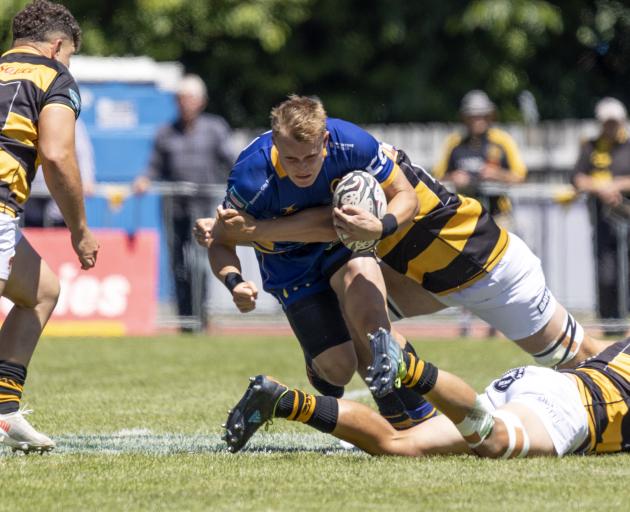 Otago fullback Sam Gilbert charges forward during the NPC Championship final against Taranaki in Inglewood on Saturday. PHOTO: GETTY IMAGES
In the end, Otago was not quite good enough.

At the same time, Taranaki showed its class, completing an undefeated season with a 32-19 win in Inglewood.

Tries on either side of halftime proved key for the Bulls.

Otago had withstood plenty of pressure to trail just 17-12 late in the first half.

However, Taranaki lock Mickey Woolliams crashed over in the corner just before the break, completing a movement which began when Kini Naholo brushed off Matt Faddes.

Just after the break, Naholo turned finisher, getting on the end of a chip from Tei Walden to score.

Stephen Perofeta added the extras, before a penalty moments later made it 32-12.

It was a devastating period.

Otago responded when first five Josh Ioane managed a try with his opposite, Jayson Potroz, in the bin.

But the Taranaki defence stood resolute, while Otago’s handling and set piece let it down in key moments.

‘‘I’m proud of the effort the lads put in and what they’ve put in all season,’’ Otago coach Tom Donnelly said.

‘‘But we probably just didn’t quite get the execution we needed today.

‘‘They’re a quality side and they showed it today, especially in that first half.

‘‘They got a bit of a lead that we couldn’t quite claw back.’’

He praised the Taranaki performance, pointing to its quality both on Saturday and throughout the season.

However, he said Otago was disappointed to not play as well as it felt it could.

‘‘I think they deserved the win today.

‘‘They had a fantastic season to go unbeaten.

‘‘It hurts because we didn’t fire the shots we wanted to, but you can’t take it away from them.

‘‘They were by far the better team today.’’

A lift in intensity was clear from the outset, but it was Taranaki that applied all the pressure in the first half.

Both ran strongly in the open and were key in an offload game that constantly had the Otago defence under pressure.

‘‘Particularly in that first half, they were able to offload the ball and get in behind us,’’ Donnelly said.

‘‘We were just scrambling. We did a good job to hang in there, but the try just before and just after halftime probably just broke our back a wee bit.’’

It took just three minutes for Taranaki to open the scoring.

Otago had built 14 phases, before a Josh Ioane offload did not stick with Sio Tomkinson, and Taranaki cleared 60m.

Florence got up to steal the ensuing lineout, before Walden stepped Faddes and forced Otago to scramble, Jared Proffit crashing over several phases later.

From there, Taranaki dominated possession and forced Otago to tackle for the majority of the next 20 minutes.

A Florence offload put Daniel Waite over in the right corner and a Perofeta penalty made it 17-7.

But when Ioane broke the line and connected with Vilimoni Koroi on a lovely flick pass to score, it looked as though Otago would escape in a good position.

A second miss by Faddes, on Naholo, sparked a movement which led to Woolliams’ try to make it 22-12 at halftime.

It was the start of that deadly period either side of halftime.

Otago put the pressure on from there and was possibly robbed of a penalty try when Potroz batted an Ioane grubber over the dead ball line, preventing Faddes grabbing it and scoring.

Potroz was yellow-carded and Ioane eventually scored from the ensuring scrum.

But Otago could not break through from there.

It had chances deep in Taranaki territory, but again its execution let it down.